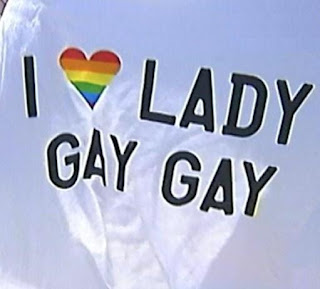 Cole Goforth was sent home for wearing what school officials called a "disruptive" T-shirt; it said “I ♥ Lady Gay Gay.” [original post HERE]
T-shirts with Confederate flags were okay; same goes for shirts with Biblical verses. But shirts with the word gay on them are bad. But the the American Civil Liberties Union of Tennessee and Lambda Legal got involved and now the high school has agreed to stop censoring Cole Goforth for wearing a "gay" shirt.
Beth Littrell, of Lambda Legal: “Sending Cole home for wearing a shirt with the word ‘gay’ on it not only trampled this student’s right to freedom of expression, but also sent a destructive message to all students that there is something wrong with being gay or even saying the word ‘gay.’ We are pleased that school officials have recognized their obligation to respect pro-LGBT speech and to protect students from anti-gay harassment instead of allowing bullies to silence speakers.”
In addition, the school has agreed to provide anti-bullying training to staff and students “to ensure that it is clear that harassment of any student, regardless of sexual orientation, is not acceptable.”
Moving forward. It's a good thing.
Posted by Bob at 2:30 PM