Nancy Wants It Done This Year 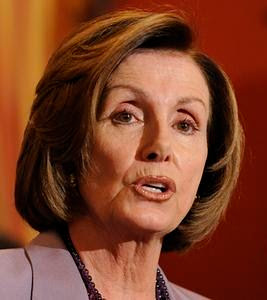 Even though all sorts of folks, including the White House, are saying "No," Nancy Pelosi is saying "Yes"
Pelosi, the House Speaker, plans on having a DADT vote this year, according to her spokesperson, Drew Hammill, who said, “it is the Speaker’s intention that a vote will be taken this year.”
Work it, Nancy. This is good news.
Aubrey Sarvis, executive director of the Servicemembers Legal Defense Network [SLDN] is thrilled with the news: “I’m delighted that [Pelosi] reaffirmed to hold the vote this year.” Sarvis also thinks it's high time for the president to step up as well. “The hour for the president as well as for the leadership to become engaged is now,” he said. “The reality is — particularly in the Senate Armed Services Committee — we are still short of some critical votes. We don’t have the votes today. We’re on the brink of getting them, and we need help from leadership on the Hill and from the president himself.”
Yes, we do.
Posted by Bob at 8:30 AM

She will get it done!
Go Nancy Go

About damned time! I wonder if Pelosi is sensing the wind on this one.

At this point activists have done sit-ins at her offices in DC and SF.

She's got to be feeling the heat.