John McCain Speaking To You Live From 1965 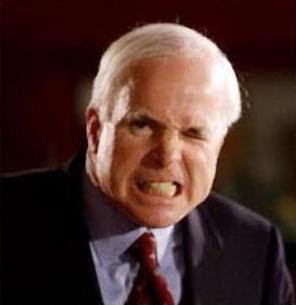 I've always thought of him as a grumpy old man. You know, the old man who sits on his front porch and screams at people to get off his lawn. But now, John McCain has gone further than grumpy, and settled nicely into delusional old man stuck in a decade a long long time ago
You see, Grampa was asked if he thought the repeal of Don't Ask, Don't Tell, was a civil rights issues and, well, let's listen in:
McCain: No. No, I don't. As Colin Powell said when don't ask, don't tell was first inaugurated, there's a difference between sexual preference and the color of one's skin. That was General Powell's statement.
First up, asshat. It is not a preference. I'd prefer you to shut your illiterate yap, but my sexual orientation is homosexual. See how that works? I'll try again, I'm a gay man and I'd prefer it if your family put you in a home.
Of course, when reminded that Colin Powell being in favor DADT was years ago, Gramps seems to think he knows what Colin Powell really meant.
McCain: He was in favor of it, and now he's come out ... for the repeal. Yeah. I think what he said then still holds true today, that it is a different issue. I think Colin Powell wants to repeal don't ask, don't tell. I don't think he views it now as a civil rights issue, though.
Colin Powell says DADT is wrong. There is no subtext, no hidden message. Stop spinning what other people are saying Gramps, and go to a corner somewhere and count the buttons on your favorite shirt.
Then, when McCain was asked if he sought out gay and lesbian service members in order to form his determination that the policy was working, he says more stupid stuff.
McCain: I make that determination by retention and recruitment is at an all-time high, the highest in the history of the all-volunteer force. I get that opinion because I visit with the troops all the time. I go to Iraq, I go to Afghanistan, I run into them everywhere. And of course I don't seek out someone who is gay. Why should I? These are all men and women who are serving. Why should I, that would be nuts. I go up to men and women and I say thanks for serving. I say thank you for serving, you are great Americans, God bless you...
Um, Grampa, you illiterate schmuck? The reason recruitment is so high is that it historically goes up during times of economic hardship. Check your facts. I mean, sheesh, surely you must remember the rise in recruitment during the Civil War....because you were there.
And, John, gay and lesbian service personnel wouldn't speak to you about DADT because they know that as soon as they spoke to you, you'd have them discharged. So, why should they talk to a homophobic-backwards-looking-discriminatory asshat such as yourself.
Seriously, McCain, it's time for you to be put out to pasture. The world has changed, and is changing, and you refuse to budge.
Get off my lawn.
Posted by Bob at 12:30 PM

So true. What I think is precious is how he's now denying that he was ever any sort of "maverick." I think Senator McCrankypants missed the invention of a little thing called [exaggerated finger quotes] video tape. He is a sad man who turned into a whore ready to abandon his principles for political victory. Pathetic.