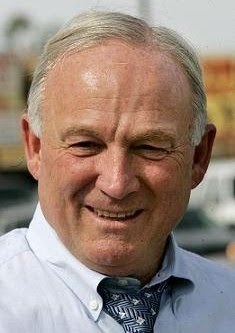 Jerry Sanders is the mayor of San Diego, California, and to hear those wingnuts at NOM--yes, I'm talking to you, Maggie Gallagher--he is solely responsible for marriage equality becoming, briefly, law in California.


See, back in the day, Jerry was big time anti-gay. He was vehemently against same-sex marriage for ever until.....you guessed it....his daughter came out as a lesbian and Jerry saw, firsthand, in his own family, what discrimination can do.


Sanders told Judge Walker how his position on marriage equality evolved over time. He went from thinking Civil Unions were good enough, but once his daughter came out, he saw that separate institutions doesn't equal equality.

"If the government tolerates discrimination against anyone for any reason, it becomes an excuse for the public to do exactly the same thing," Sanders said, and that by not supporting marriage equality, "I was discriminating against even my own daughter."

And Jerry Sanders may be on the leading edge of change, there is evidence that many more conservatives are now leaning toward acceptance of equality. Seriously. In cases of people like Jerry Sanders it because he saw discrimination up close, aimed directly at his own child. For Ted Olson, it wasn't because of a gay family member, it was because of how he viewed the issue of marriage. Olson believes, and rightly so, that conservatives should embrace gay marriage, since marriage as an institution provides stability, creates community, and encourages others to place the interest of someone else before their own.


I remember having the discussion with my own parents many years ago. They, too, believed that a civil union should be enough, but when I explained to them that it seemed highly unfair that my sister could--and did--get married--and married [sorry, sis, I went for the joke], and my brother could--and did--get married, then it was simple discrimination against me for my sexual orientation that I couldn't get married.


I think that's how change will come.


Getting people to stop listening to the lies of people like Maggie Gallagher, who uses fear and hate to maintain the status quo, but to simply speak our truth.

The quote that you included: "If the government tolerates discrimination against anyone for any reason, it becomes an excuse for the public to do exactly the same thing."

That is succinct and extremely clear about the reasons to end ALL discrimination.

I really enjoyed reading this post. Bravo! (Gave me a warm, tingly feeling all over.)

Great article, Bob. The simple fact is that all discrimination is evil.

The best way to change people's hearts, is for them to see us up close and personal. That shatters many of the misconceptions and lies very quickly.

as they say...what comes around goes around....