Quote Of The Week: John McCain circa 1955 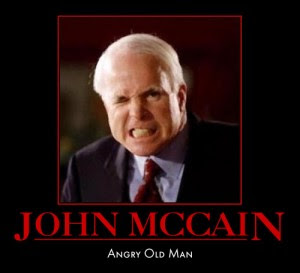 In his State of the Union address, President Obama asked Congress to repeal the ‘Don’t Ask, Don’t Tell’ policy. I am immensely proud of, and thankful for, every American who wears the uniform of our country, especially at a time of war, and I believe it would be a mistake to repeal the policy.
This successful policy has been in effect for over fifteen years, and it is well understood and predominantly supported by our military at all levels. We have the best trained, best equipped, and most professional force in the history of our country, and the men and women in uniform are performing heroically in two wars. At a time when our Armed Forces are fighting and sacrificing on the battlefield, now is not the time to abandon the policy.
I know I have my issues with Barack Obama, but every time Grampa John McCain opens his mouth I thank my lucky stars that he wasn't elected. For him to honestly think that over ten thousand Americans losing their jobs because of their sexual orientation is a "successful policy" shows just how out of touch he is, and how necessary it is for Old McCain to retire and go back to Arizona and shout at kids to get off his lawn.
For the record, Gramps, discrimination is NEVER successful.
Posted by Bob at 10:00 AM

Well, if he is so immensely proud of EVERY American who wears the uniform of our country, then it follows logically that he is including all the gay men and women in our armed forces! Duh!!!

ugh!
He should listen to his wife.

He is a total idiot and should disappear. I can't wait to see if Johnny boy reverses his opinion since Colin Powell did. He once said he based his opinion on Powell's. Put your money where your mouth is Johnny boy!