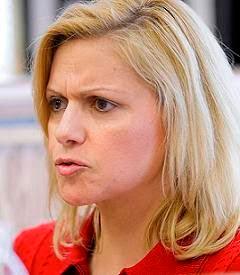 
Y'all remember she was married to former New Jersey Governor, Jim "I am a gay American" McGreevey? Yeah, well, big surprise from a woman who cannot get over the idea that her husband left her for man, she is speaking out against marriage equality.


“We have the civil union law in place, which I think is wonderful. I was raised a Catholic. I grew up in the church, so I believe in traditional marriage between a man and a woman."


Dina? Wingnut? Keep your faith out of my laws, m'kay?


Then she says: "There are at least two million marriages that break up each year because one of the spouses come out of the closet. You don’t understand unless you live it. When you’re living with someone who has a secret, they take every measure possible to hide it."


Dina? Asshat? Um, lemme see if I can set you queer on this. If gay men and women were accepted equally and freely in society, with all the rights, privileges and benefits afforded, say, you, maybe then they wouldn't feel forced into sham marriages that break up years later because of their extreme unhappiness at not being the man or woman they are truly meant to be.


You're pissed at Jim, Dana. We get it. God, do we get it. But seriously, sweetie, build a fucking bridge and get over it already.
Posted by Bob at 9:45 AM

she needs to heal

Neither hurt or desperation are ever pretty. Nor is bigotry, and faulty logic. Or the wrong shade of the L'Oreal blond...