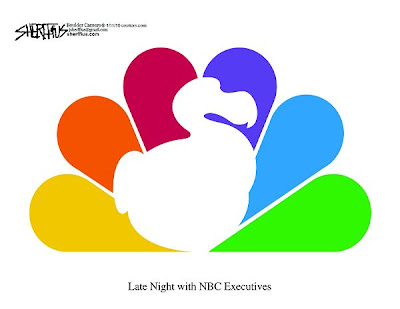 In the interests of fairness, I will say that I have never liked Jay Leno. I remember an old car commercial, where the tagline was something like, "This is not your father's Oldsmobile."
Well, Jay Leno isn't my father's late night talk-show host. He's more like my grandfather's late night talk-show host.
I don't find him funny. At all. I was a Johnny Carson kid, and then a Letterman man. I liked their irreverence, and the sense that anything might happen. With Jay, well, anything doesn't happen, except stale jokes.
So, I was kinda happy when they announced Leno was leaving The Tonight Show and Conan O'Brien was taking over. Conan has that same Carson-Letterman sense. He doesn't take himself too seriously, and he's simply out to have a little fun before he sends you off to bed. Now, again, in the interests of fairness, I'm still Team Letterman, but I liked the O'Brien Option, you know, if he was having a better guest line-up or something.
Then NBC put Leno at 10PM; the same show he'd done before, only ninety minutes earlier. If I was Conan O'Brtien, I'd be pissed. Why take Leno off The Tonight Show and then let him do the same show at an earlier hour? Senseless. And a colossal failure. Epic. Viewers turned away in droves from NBC. I myself was heard to mutter, I want my SVU!
So, now, with revenues way down--NBC has said it will lose hundreds of millions of dollars airing the Winter Olympics--they want to put Jay back at 11:30, er, 11:35, and move Conan to 12:05. So, Conan O'Brien's Tonight Show becomes The Early Tomorrow Morning Show since it will no longer air tonight.
Seemed smooth sailing, until. The Letter:
People of Earth:
In the last few days, I've been getting a lot of sympathy calls, and I want to start by making it clear that no one should waste a second feeling sorry for me. For 17 years, I've been getting paid to do what I love most and, in a world with real problems, I've been absurdly lucky. That said, I've been suddenly put in a very public predicament and my bosses are demanding an immediate decision.
Six years ago, I signed a contract with NBC to take over The Tonight Show in June of 2009. Like a lot of us, I grew up watching Johnny Carson every night and the chance to one day sit in that chair has meant everything to me. I worked long and hard to get that opportunity, passed up far more lucrative offers, and since 2004 I have spent literally hundreds of hours thinking of ways to extend the franchise long into the future. It was my mistaken belief that, like my predecessor, I would have the benefit of some time and, just as important, some degree of ratings support from the prime-time schedule. Building a lasting audience at 11:30 is impossible without both.
But sadly, we were never given that chance. After only seven months, with my Tonight Show in its infancy, NBC has decided to react to their terrible difficulties in prime-time by making a change in their long-established late night schedule.
Last Thursday, NBC executives told me they intended to move the Tonight Show to 12:05 to accommodate the Jay Leno Show at 11:35. For 60 years the Tonight Show has aired immediately following the late local news. I sincerely believe that delaying the Tonight Show into the next day to accommodate another comedy program will seriously damage what I consider to be the greatest franchise in the history of broadcasting. The Tonight Show at 12:05 simply isn't the Tonight Show. Also, if I accept this move I will be knocking the Late Night show, which I inherited from David Letterman and passed on to Jimmy Fallon, out of its long-held time slot. That would hurt the other NBC franchise that I love, and it would be unfair to Jimmy.
So it has come to this: I cannot express in words how much I enjoy hosting this program and what an enormous personal disappointment it is for me to consider losing it. My staff and I have worked unbelievably hard and we are very proud of our contribution to the legacy of The Tonight Show. But I cannot participate in what I honestly believe is its destruction. Some people will make the argument that with DVRs and the Internet a time slot doesn't matter. But with the Tonight Show, I believe nothing could matter more.
There has been speculation about my going to another network but, to set the record straight, I currently have no other offer and honestly have no idea what happens next. My hope is that NBC and I can resolve this quickly so that my staff, crew, and I can do a show we can be proud of, for a company that values our work.
Have a great day and, for the record, I am truly sorry about my hair; it's always been that way.
Yours,
Conan
There you have it, NBC.
Don't be stupid. Put Leno out of our misery.
Posted by Bob at 12:00 PM

I have never understood Leno's fame. He might be a great standup comic (I don't know) but as a talk show host he is awful. I get uncomfortable watching him. Everything he does seems forced. Conan's letter is so articulate and well thought out. He gets the slams in perfectly. As he should.

I can take or leave Leno, but he has had his time in the limelight, so Conan should be able to stay on the Tonight Show I say. And it's also not fair to Fallon who took Conan's place either.

A few days ago, I proposed via Twitter Jay Leno should have adopted the Real Time format. I noticed he did something similar last night.

Seriously, can't feel anything for Jay or Conan; they make more in a day than I would in a year and then some.

No offense, but I've never liked any of these shows. Of the few times that I've watched any part of any of these late night talk shows, they all seem so scripted...and waiting for the drum ba-dum-shuchhh.

A friend of mine turned me onto Chelsea Lately (with Chelsea Handler) on the E! network a couple years ago. The show is only a 1/2 hour long (leaving you wanting more) and just so irreverently funny. It's scripted, but the commentary from the panel of guests is adlibbed for the most part and it never gets dull. You just never know who is gonna say what and when.

Give it a shot; I think you may like her.

NBC is notorious for stupid decisions. I think I could be in charge of programming better than they are. I wouldn't please the MBA's but bet many viewers might be happier. On the other hand, I will be watching all the Olympics I can manage to work in. Love the Olympics!

In this case, NBC needs to stick with the contract with Conan. They are screwing over him and Leno. Whatever they do will probably be wrong.

I also miss the drama series that were on in that slot (for us 9:00 pm) but do watch Leno periodically. I have a DVR or wouldn't unless there's nothing I want to see on the other channels.

Cable is giving network lots of competition since they started making series that are good.

This comment is all over the place! LOL Rambling Joy!

I don't watch either show...but when I have caught Conan doing anything, he seems funny in a an modern & irreverant way. I do love-Triumph, the Insult Comic Dog.

I'm sorry, but Leno is never funny to me. NBC has made a mess of everyting.

Never, ever, been a Leno fan, and do not think I have watched an episode with him. I think Conan's letter is dead spot on. I agree, let Leno go.

The Tonight Show has been so significantly damaged it may take Conan years to get back to the ratings Jay had a year ago. Conan knows this of course, and knows that if he jumps to another network like ABC or FOX, he'll do quite well.

If Conan leaves and Jay goes back to 11:35 in the Tonight Show, will it still be called that? If Jay insists on it being called "The Jay Leno Show", it is doomed. If it is called "The Tonight Show", as I said above it is already so damaged it will take years to recover. Jay's best course of action is to retire now and go live the good life.

Worst case scenario: BOTH Conan jumps and Jay retires leaving no one for the Tonight Show. If they give the job to Jimmy Fallon, will he be able to wait out the years it would take to establish a following? Would the NBC affiliates be so pissed they would revolt en masse? What about someone like Kathy Griffin? She would not only be successful, she could steal viewer away from Letterman.

Who is in charge at NBC and why are they still employed?

Conan needs to have sex with staff members to generate some ratings. It worked for Letterman. Good for him to stand up to the NBC idiots. Jay should definately go... He is boring boring boring. I'd rather watch the commercials.

I'm also a Letterman person, and Leno is like...anti-funny to me! Shame on NBC, and Conan is a class act. No matter what happens, I think he'll land on his feet.