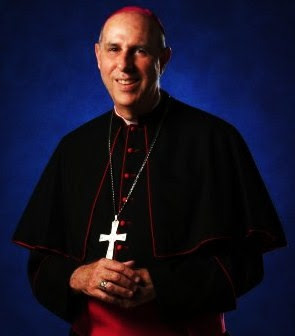 Out there in Hawaii, Bishop Larry Silva is urging Catholics to tell their legislators that they oppose a bill to allow same-sex civil unions.
Yup. He's against even "less than" status.
Says Bishop Asshat: “The truth is that God made complementary sexes, that he gave the power of procreation to be used responsibly by a man and woman, and he wants both father and mother, when possible, to contribute to the healthy nurturing of children."
Um, wingnut? God, if that's your belief, made all of us, and I don't think she'd be happy with your assessment. And, suddenly, the Catholic Church is okay with single-parent families? Oh, because they're probably heterosexual.
"This special role of man and woman has been recognized for millennia by societies as marriage, the stable, committed relationship of man and woman giving themselves to each other totally and bearing the fruit of that love in the procreation and education of children."
Then why aren't you working overtime to prevent child abuse to protect children? To prevent divorce to protect this most sacred of institutions?
"In many places throughout our country and the world, and now here in Hawaii, some are attempting to distort this natural relationship by claiming the right of persons of the same sex to marry. They point out that it is discriminatory to allow opposite-sex couples to marry but to disallow the same for same-sex couples. And they are correct! It is discriminatory, making distinctions between one and another. But not all discrimination is unjust. Some is quite justified because it is based on reality and truth."
Not all discrimination is unjust? So, then, by your own backasswards wingnut fucktard reasoning, Ii should discriminate against the Catholic Church for providing safe haven for pedophiles for centuries? For goosestepping along with Nazi Germany? Because that is true and real? Is that what you mean by discrimination being okay?
I suggest, Bishop Larry, you spend a little more time talking to god, and really listening to her this time, because I don't think she believes it's okay to discriminate against anyone. And she may have something to say about your Pedophile Protection Program, too.
And, Larry, I won't bother calling you Bishop, keep your church out of the laws because one day, there might be a church with greater numbers and more money than yours, that will begin to systematically punish the Catholic Church and as you begin to ask the world to help you, you'll find yourself wanting.
Just sayin'.
Posted by Bob at 9:00 AM

I long to see the day when the Catholic Church fails. I hope I'm around to dance in the ashes.