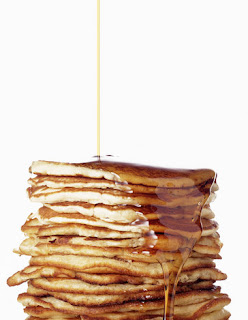 Busy work week for both Carlos and I last week. We shared breakfast a few times, and dinner a couple of times, some nights of mutual snoring, but that was the extent of our time together. So, I was ready for a lazy Sunday. Carlos. Pancakes. Lazy.
In that order.
But then Carlos reminded me that he'd invited David and Neal, the Round The Way Gays, and Round The Way Gay David's sister, Barbara, for breakfast on Sunday morning. No big deal I thought; great people. Sleep late. Have a fun breakfast. S'all good.
Until, late Saturday night, when Carlos tells me he invited them for breakfast at 8-freakin'-thirty AM!
On.Sunday.
I was sure he was kidding me. I begged him to say he was kidding. I pleaded with him to tell me it was a joke. I asked, Why? Even we don't get up for an 8:30 breakfast on Sunday. And when we went out to breakfast with David and Neal last Sunday, we went at 10:30? You seriously didn't invite them at 8:30?
Yes. I did.
Had I not been so tired, I could have pancaked him right then and there.
Sunday morning, 7 AM, the alarm goes off, and I'm told to Get up!
And I did.
And bleary eyed, and not-so-silently cursing, I fried up some some bacon and Andouille sausage; swearing, I cut up fruit; calming down somewhat, I made a mix for Bloody Marias--Marys, but with tequila, because I does like me some tequila. Especially if I'm hauled out of bed at 7 AM om a Sunday.
Oy!
I got my prep done and ran back for a quick shower. Carlos prepped up his Banana-Pecan pancake batter and then he dashed back for a shower. As I was debating whether or not to have a Bloody Maria, sans Bloody, if you get my meaning, I glanced out the dining room window and there were the Round The Way Gays and Sister.
In bathrobes!
See, they, too, thought, Eight-freakin'-thirty!!
But then, after some mimosas and some Tequila Marys, all thoughts of the early rising dissolved, and there was good chatter and good food and good drink and good company for the morning.
Of course, as an extra added bonus, there were gifts. See, a certain someone who shall remain nameless [me] is having a birthday this week, so after breakfast, there was The Presenting Of The presents!
A bottle of wine! Who knew!?! A cookbook!?! For recipes to serve with the wine. A new winter sweater, to wear on those cold days when I'm making something dee-lish from the cookbook and sipping said wine. And a book about my place in the universe, called You Are Here: A Portable History Of The Universe.
Yes, light reading, but again, with the wine....yum.
So, even with the early-bird wake-up, and the flip-the-bird at Carlos, it was a wonderful day, and the start of the week-long Smallville celebration known as The Birth Of Bob.
Okay, maybe it's just a celebration in m y mind, but hey, there'll be wine, books, and food.
Plus, Carlos and I will be taking a midweek getaway which is always something to enjoy. As long as I don't have to get up too early.
Posted by Bob at 8:00 AM

Happy Early Birthday Bob. Great story. You know, I would like to meet all the bloggers I read some day, but you and Carlos especially. I just love the way you two interact.

From a dream day, to a nightmare, to a great day. Glad you had a great time and hope you have a great getaway :o)

LOL - this kind of semi-miscommunication could just as easily have occured at our house! Glad it turned out to be a grand time.

Mutty said...
This comment has been removed by the author.
4:16 PM