Gavin Newson On The Right Side Of History 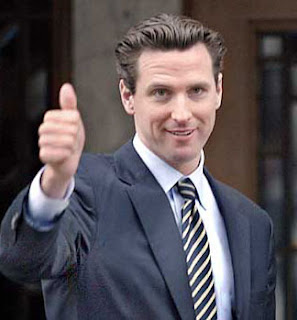 Gavin Newsom was once considered Obama-like, a young rising star in the Democratic Party. He ran a successful business, had a huge line of supporters to fund a campaign, and well, he is kind of pretty to look at. As San Francisco's Mayor, there was talk that his next step should be to run for governor of California, and after that, well, President Newsom sounded fine. But with him bowing out of the California gubernatorial race, the question arises: what happened to Gavin Newsom?


There are those who say it all began to unravel in 2004 when Gavin Newsom decided it was time that marriage equality was the law of the land in San Francisco. Instantly, he became a hero to the LGBT community around the world, and those who support us, for his unwavering, unyielding determination to do the right thing, the equal thing.


But, while those who fight for equality stood with Gavin Newsom, the Democratic Party, which had once considered him one of their "golden" boys, suddenly distanced itself from the mayor. In a recent interview with Maureen Dowd, Newsom talked about his political career, and the choices he made, and the fact that he believes his political future came to a screeching halt when he made the decision to champion same-sex marriage. He even suggests that the Democratic Party punished him for his pro-equality stand.


According to Newsom, as soon as he moved to recognize same-sex marriage in San Francisco, Democratic Party activists stopped calling, and began avoiding San Francisco for fear of being associated with a radical gay rights mayor.

"Life was really good, and then it came crashing down. ‘You’re not going to be speaking at the convention. We overbooked.’ And then it becomes the house of cards with the Democrats excusing themselves from visits to this city and being in the same room with me," Newsom said in the Dowd piece.


But why be so surprised? This is the Democratic Party. The party that proudly states that it stands for the rights of all Americans, including the LGBT Americans, but then turns its back on a candidate who actually does something for us.


Now, to be fair, there are those who say that Newsom had an uphill struggle being recognized anywhere outside of San Francisco, but, well, being a Senator from Illinois didn't exactly hurt Barack Obama. So, what was the difference? Obama talked about LGBT rights; Gavin Newsom did something about LGBT rights. He stood up for us when the rest of the Democrats merely patted our heads, took our money, and offered us hope.


Gavin Newsom, perhaps because of his stance on LGBT rights, was denied the opportunity to speak at the 2004 Democratic Convention. His stance inspired anger from then-Presidential candidate John Kerry, who was against marriage equality in 2004 even in his home state of Massachusetts. Even Barack Obama, still a US Senator in 2004, allegedly refused to have his picture taken with Gavin Newsom during a 2004 fundraiser for fear of creating a some sort of connection Obama and marriage equality supporters.


In Maureen Dowd's piece, she says that, although Gavin Newsom may have ended up alienating the Democratic Party, and subsequently derailing his political future, in the end he will be seen as one of the lone candidates who stood on the "right side of history." As Dowd sees it, after Newsom, any Democrat running for office in California will have to support marriage equality if they want to have a chance. And it may turn out, that once Obama is done with his presidency, no other Democrat will be able to run for that office without a clearly defined, pro-marriage equality stance.


And that's more than you can say about almost any other Democrat.
Posted by Bob at 9:00 AM

How very interesting. So the party apparatus itself wants nothing to do with gay issues.

We need a new progressive party in this country. Because we're never going to get what we want from Democrats or Republicans.

Gavin Newsom will always be a hero in my book! It takes a lot of courage and conviction to stand up for what you believe, even when it's the unpopular thing to do.

I believe this. Thanks for the posting it.
I wish more politicians would take a stand for this issue. There still aren't a lot willing to say gay marriage is ok and they support it.

Hey, I am a fan of Newsom, follow him on Twitter, and like much of what he says, but to think his issues have only to do with his support of gay rights give us way more power than we actually have. He has had his own trials and tribulations, including coming from an place most Repubs love to demonize.

Thanks for this, Bob. If only I could be surprised that his career came to a shuddering halt because he supported the cause of true equality.

Its a terrible shame that standing up for equality for all Americans (not just saying it) may have cost him a bright future. 'Being on the right side of history' is nice but a weak consolation.

Maybe Newsom declined to run for Governor because its akin to wanting to be Captain of a sinking ship. He's young; maybe he's waiting a few years until CA is not in such dire financial shambles.