Gay Isn't Welcome In This Church 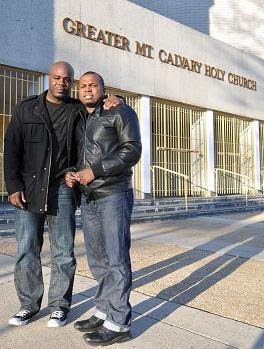 Jon Mack and his partner, Michael Garrett, ended their one-year tenure as members of Greater Mount Calvary Holy Church in Washington D.C. last week. The two gay men said they were startled and deeply hurt when Bishop Alfred Owens, the church pastor, appeared to be sending them and other same-sex couples a blunt message about their sexual orientation.

“Sex is only pleasing to God in the marriage bed, and the marriage bed is a man and … a woman!” Owens shouted from the pulpit, with hundreds in the church pews shouting their approval; Owens’ words can be heard on a recording of his sermon at the church’s web site. “If marriage wasn’t between a man and a woman, you wouldn’t be here because two men doing it don’t produce no kids. And two women doing it don’t produce no kids! It’s all about family.”


Jon Mack: “During this homophobic rant, me and my partner got up and walked out.” Mack and Garrett are believed to be the first gay men to publicly disclose their departure from a church that activists say has a large number of closeted gay members, mostly black. “What hurt me more than what he said is how the congregation yelled and agreed with him,” Mack said. “It showed me that people that don’t even know me hate me just because of my sexuality.”


But Mack and Garrett may not have paid close attention to their new pastor before they joined the church. The two said that, although they had heard reports of Owens making made anti-gay remarks in other sermons, they chose to attend his church because of it's charismatic, highly animated services, which include performances by several different choirs. It isn't clear if either men knew that, in 2006 when, Owens, in a recorded sermons on the Sunday before Easter, referred to gays as faggots. 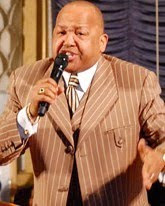 “It takes a real man to confess Jesus as Lord and Savior,” Owens said in that 2006 sermon.
“I’m not talking about no faggot or no sissy. … Let the real men come down here and take a bow — all the real men. I’m talking about straight men. … Praise God that you’re straight.”

These remarks prompted LGBT activists to ask then D.C. Mayor Anthony Williams to expel Owens from a mayoral task force on faith; Owens issued an apology and he was allowed to remain on the faith task force.


For me, Bishop Owens doesn't get God. God, or whatever being or force you believe in, is love. God does note preach hate, does not name-call, does not denigrate. Organized religion, and the asshats like Owns who run those places, are the ones spreading the word of God as the word of hate and intolerance.


I hope Jon Mack and Michael Garrett find a place to worship where they are treated with the kinds of dignity and respect that a real god would want.
Posted by Bob at 11:00 AM

Well said, Bob
Organised religion and God have never seemed to manage to sing from the same hymn sheet as far as I can tell

I hope they find a place too. Very said. They did the right thing by walking out.

Amazing how people who say they look at the Bible as a historical document refuse to see the historical significance of bigotry in the organized religions, and tyranny and loss of life brought about by the religious wanting to stare at others and pass judgment rather than look within and seeking healing of their own ills.

This is my I don't go