They Want Us To Wait. Again! 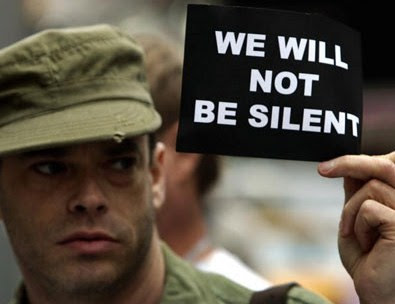 Now it seems that lawyers for the nation's top military officer are recommending holding off on any repeal of DADT, the ban on openly gay military service. The delay could push a decision by Congress to the middle of the next presidential election.


Why? It's a discriminatory policy. Everyone knows it. Why wait.


I, for one, am so sick of being told to wait, to be patient, to go and sit at the back of the Gay Bus.


While some Pentagon advisers say that lifting the ban would not cause unmanageable problems or divisions among the uniformed military, others want to hold off.


''Now is not the time,'' according to the in-house legal counsel for Admiral Mike Mullen, chairman of the Joint Chiefs of Staff. ''The importance of winning the wars we are in, along with the stress on the force, our body of knowledge and the number of unknowns, demand that we act with deliberation.''


And out rolls the fear parade. We're in these wars so let's not let people serve openly; let's boot out the gay ones because they're, you know, gay.


We.Are.In.Wars. With an 's' and you want to keep a policy that allows the military to lower their ranks? Oh, that's smart. And it smarts, too.

Mullen and other Pentagon leaders have quietly begun a new push to build consensus for the timing of a repeal that Mullen and others assume will come eventually. Joint Chiefs legal advisers recommended delaying the start of the repeal process into 2011, with the Pentagon sending a proposed replacement law to Congress by late summer of that year.


Hurry up. And wait. And keep discharging soldiers because they're gay.
Posted by Bob at 2:00 PM

Hurry up and wait. That's all this administration is good for. We need to figure out a way to sting them but good.

I'm interested to see what the LGBT cabal meeting will create

Bob, I'm sure you know how I feel about this one. They just want to delay and stall. They hope to stall long enough for them not to have to do anything.