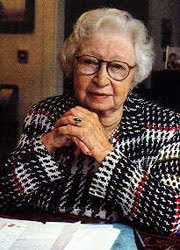 Miep Gies, the Dutch citizen who helped Anne Frank and her family hide from the Nazis during World War II and discovered the writing that became Anne Frank: The Diary of a Young Girl, passed away Monday at age 100.
Gies was the last of the living non-Jews who assisted the Frank family as they hid in a secret annex in Amsterdam for 25 months before the hide-out was raided. During that time, the young Frank, who later perished in a concentration camp, wrote what would become her famous diary, which continues to be a global best-seller.
“People should never think that you have to be a very special person to help those who need you.”
Posted by Bob at 12:30 PM

Now I want to know more. I never really thought about the people who hid the Franks. Were they also arrested? Did they go to the camps as well?

One thing I do know, they had incredible courage to do what they did?

Thanks for calling attention to this wonderful human being, Bob.

I toured her house in Amsterdam a few years ago and I bought the book there - it was really sad and inspiring to be there - to see where the family hid, and the house itself - really a great sense of history and the greatness of the human struggle!