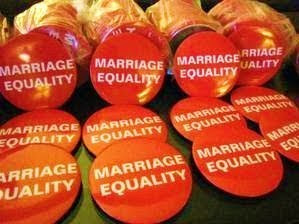 from change.org by Michael Jones
Here goes five of the best bits from Ted Olson's opening statement. Prepare to get your equal rights on.
1. "In the words of the highest court in the land, marriage is 'the most important relation in life,' and 'of fundamental importance for all individuals.'”
Ah, that phrase "all individuals." Sure seems to indicate that judging from U.S. Supreme Court precedent, marriage has always been framed as something that everyone should have access to. That probably won't sit well with Justice Clarence Thomas. But the best part about this is that opponents of gay marriage are always blabbering about how gay and lesbian folks want to redefine marriage. Marriage, as it's been defined by the U.S. Supreme Court, has always been something that is vital for all. Nothing redefining about including gay and lesbian couples under that umbrella.
2. "[Marriage] promotes mental, physical and emotional health and the economic strength and stability of those who enter into a marital union. It is the building block of family, neighborhood and community."
Cue the conservative argument for same-sex marriage. Folks like Andrew Sullivan and David Brooks have been making this case for years (in the case of Sullivan, decades). It makes no sense for "pro-family" groups to despise gay marriage since it fosters principles that they should buy into hook, line and sinker.
3. "Sadly, Proposition 8 is only the most recent chapter in our nation’s long and painful history of discrimination and prejudice against gay and lesbian individuals. They have been classified as degenerates, targeted by police, harassed in the workplace, censored, demonized, fired from government jobs, excluded from our armed forces, arrested for their private sexual conduct, and repeatedly stripped of their fundamental rights by popular vote."
Perry v. Schwarzenegger is primarily about gay marriage, but let's not lose sight of the forest for the trees. This case is also about equal rights across the board. From being fired from your job because you're LGBT, to being discharged from the military, to having the police harass you at a local bar -- that's what this case is about in its bigger picture. Gay marriage is just part and parcel of the larger struggle for LGBT rights. For Olson to frame it this way gave the case an even bigger national profile. This case is equally about two Californians getting married as much as it is that LGBT couple in Indiana, or Michigan, or Louisiana.
4. "The State of California has offered no justification for its decision to eliminate the fundamental right to marry for a segment of its citizens. And its chief legal officer, the Attorney General, admits that none exists."
Or, in playground talk, the other side just doesn't have a clue. Opponents of gay marriage will say that same-sex marriage threatens families (although they don't know how). They'll say it ruins tradition (although they can't explain why). They'll say it threatens the purpose of marriage, "procreation" (something it clearly can't do, given that straight couples marry all the time for reasons beyond making babies). But no matter how much their lips move, opponents of gay marriage have no justification at the end of their sentences. They just have personal philosophies and religious convictions. Those are swell, but they shouldn't dictate the law.
5. "Proposition 8 ended the dream of marriage, the most important relation in life, for the plaintiffs and hundreds of thousands of Californians."
And there you have the soundbyte to capture day one. "Prop 8 ended the dream of marriage," despite having no rational reasons for doing so. If there's a topic sentence for this case, this is it. At the heart of Perry v. Schwarzenegger is getting back the dream -- the dream that no matter who you are in this country, you can be entitled to the full slate of rights that were afforded all Americans in our nation's founding documents. It's not about creating second-tier relationship mechanisms, or categorizing one set of couples differently. It's about equality for all. Olson gets it. Boies gets it. Will Judge Vaughn Walker?
Posted by Bob at 2:00 PM

I've just read some of the oppositions ridiculousness and in my mind this is a slam dunk for those against Prop 8.

But I understand, they're going to have to convince the Supremes on this one and we've got a number of asshats in there right now.

...one commenter on tv was saying the other day, even the worst criminals in jail are allowed to get married~

I agree with Truthspew, it does seem like a slam dunk. But I've been heartbroken before, and thus I try to keep my excitement in check. Being from NJ and having them say NO to marriage and YES to weed, I've been up and down this week.

But the Prop 8 people knew they were in the wrong, and that's why they didn't want cameras in the court. But ah - you can't stop The Twitter.

I had to laugh at Olson's claim that marriage promotes emotional health. I don't know what fantasy world he lives in, but, in the real world, marriage makes people crazy and miserable.

Great post!! Keep us current on this vital issue please.