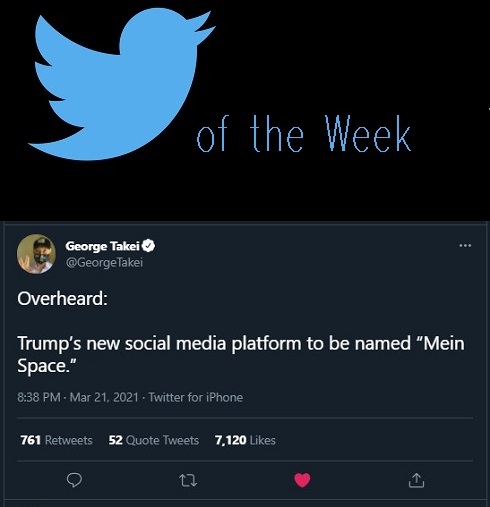 Omg....with all those spices Im surprised your cholesterol isn't through the roof.

Finger crossed for Tux. That was one of the first signs for my Starbooty. She Unfortunately didn't last long.

Swedish is always good. Those men are often hot. One of my ex bosses was Swedish. He drove me nuts in a good way.

I wondering I'd Sidney Powell washes the fruit off before she eats it?

The Legends owners are smart!!!! I just read a story of four people who tested positive for COVID 19 after being fully vaccinated. Guidelines still need to be followed.

too many spices in the rice. hope tuxedo gets better soon. NO MORE GUNS! STATEHOOD FOR DC! the only things swedish I like are fish and meatballs. and we all love george takei!

Sympathies re Tuxedo and his problems. My old dog developed diabetes a year and a half ago and has injections twice a day. She is now so healthy and loving life again. Good luck with the diagnosis.
Lesley

Oh Tuxedo! I once drove a friend's cat to a new home three hours away and the goddamn thing yowled the entire way. Boy was I glad when that trip was over!

One can always count on George to get it right.

I hope Fredrik kept his receipt. It appears he's packing some extra muscles. He should return those and get store credit.

LOVE your description of the Cathartic Church. Please go to Wikipedia and add it at once!

Powell... interesting defense. I learned this morning over at Bobby's Blog that it is the same defense FOX news used to get out of paying out for something T(F)ucker Carlson said. The judge bought it. So, who knows.

Ugly Ted got on the news last night and complained that those Dems are making a political issue of gun violence as a means to take away law abiding American's second amendment rights. Sigh. He looked like Elvis, if Elvis melted.

I think Kathie Lee and Koda should host Jeopardy and take a swig every time someone has a stupid answer. How I miss those two booze bags.

Oh, dear, about Tux. Hard when they get old. We have a 21 year old. We had to buy things so he can step up to the bed, the couch, a chair, etc. He's such a crabby puss, but love him so and as long as he comes running to eat, we'll accommodate. Good luck with Tux. Hope it all works out.

Thanks for the feed. Take care. Wishing the best for Tux.

I think yeah, maybe Carlos needs to tone down the spices a tad (and goodness knows I love your husband). Please be gentle with him. I hope Tuxedo is ok but what can you say with a 14 year old cat. As for your sexy Swede, sadly that's the first one that hasn't done anything for me. Maybe I just like them dark and mysterious (not that any of them would look at me anyway but one can dream)!

Ha!
I'm still laughing at Upton's Cathartic Church. That's fab.
Poor Tuxedo! Hope it's something minor (at his age, minor is a blessing).
I love George Takei! LMAOOOO
And I hope The Kraken is left without a penny. Not. One. Penny.
Oh, Sweden. I'd like to get a taste of Mr. Ericsson. I can do that store credit, Upton!

And even better news? She has, in court, announced that she was a liar, that Donald Trump is unreasonable, and that his followers are crazy.

It's like the Christmas present that keeps on giving All-YEAR-ROUND.

Oh dear, sweet Carlos! With all of those spices, why bother with the rice?
Bobulah, sweetiekins, please stop disparaging fuckmonkeys this way. I hear they have a union and you can be sued for comparing them to stuff like the Catholic Cult.
El Gato Guapo (still my superhero) gets all the hugs today. Hang in there guys.
That is one tasty Swedish meatball! Yummy!
I don't watch Jeopardy anymore, mores the pity. I got bored with the categories long before Alex Trebeck died. I tried watching again, but no.

Hmmm... Five spice. You won't believe it but I know that three of the things in that are cloves, cinnamon, and fennel seeds. INTERESTING addition... as are some of those others. Is Carlos saying his life isn't spicy enough? Hope whatever it is with Tuxedo is eased and he continues to be the happy cat.

Can we please require Thing 45 to pose 8 hours a day... around the country... so everyone can get a chance to punch it?

I always wanted to look like a Swedish Ericsson.

My cat Wolfgang (now 12) has had arthritis since he was 2 following a car accident. He has been on arthritis medicine ever since (Cartrofen) and it really, really helps. He has an injection every three weeks (formerly every 4 weeks) and no doubt that gap will continue to decrease.

We love Carlos...Just remind him that sometimes simple is best...So many competing flavors...Take him to a cooking class and in turn he can discover which spices are best for what and which complement each other...The best to Tuxedo...Fredrick gives good face but he looks like he can put on a few pounds...I have seen male models in person and they are almost sick-thin...Eat a burger..Lots of maintenance ...

@MM
I reminded Carlos that, with all those spices, it’s hard to tell what’s what.
We heard back from the vet. Tuxedo has kidney issues and needs a special diet; it’s all old age related, even the wobbly legs, because he’s at least 15 or 16, maybe 17.
And I’m sure you love a good Swedish “meatball”!
That Sidney needs a Silkwood Scrubdown on her brain.
I loved that the diner owners are in Texas; it proves they aren’t all asshats and Q’s!

@TDM
Thanks for the Tuxedo hugs. He’s actually doing good today and we have a special diet coming for him.
Mein Space is perfect for Thing #45 …or perhaps, Blank Space?

@AM
I hate the Catholic Church. Raping kids gets a pass, but an LGBTQ person feeling suicidal doesn’t need help?
Carlos is on Spice Probation.
Tuxedo has acondition—see what I told Maddie—and we have a plan for him going forward.
Fredrik has Swedish Meatballs …at least you get an idea of them in those photos.

@Lesley Duncan
Luckily, we have been told that diabetes and arthritis aren’t the issue. The depletion of muscle mass in his back and hind legs causes the wobbly. But he does have a kiney issue tht can hopefully be resolved with a special diet.
Thanks!

@Debra
He’s a very easy going cat, except in the car!

@uptonking
Takei nailed it!
As I am aptto say, the Catholic Church can fuck all the way off.
He can bring the muscles to me. I’d find a good use for ‘em!
Hopefully DC gets statehood and Congressional representation.
Powell seems to be saying, it’s not my fault I put up the Stupid Shit Defense and people believed I meant it!
Legends in Texas of all places!
The GQP needs the NRA coins and don’t care about people being murdered.
I can’t with Kathie Lee …not even with a Box of Chardonnay.
I’d like the real Thing #45 to stand still long enough for me to throw something.
I hate Tuxedo getting old, but he’s not hurt, not in pain, and we have anew diet that will be better for him.
Carlos, in a good way, most of the time, is always too much!
Thanks for the good wishes.
Xoxo

@Treaders
Oh, I was gentle. I gently put a lock on the spice rack!
Tuxedo’s a good soldier and gets around fine. It’s mostly when he tried that he struggles a bit. But, yeah, he’s getting up there.
Fredrik is what I call oddly handsome.

@Six
Yeah, Tuxedo is getting up there. At the vet’s when they asked how old he wasCarlos said he was 10. I reminded Carlos that we’ve lived in SC over 14 years and had Tuxedo at least a year efore that. My man ain’t good with dates!
Takei has a killer sense of humor!
I know the Kraken ain’t got a billion but take whatever she has.
Fredrik does give me tingles.

@Cookie
I hope the Kraken chokes on all her words. She’s the perfect lawyer for a con like Thing #45.

@Deedles
Don’t give Carlos any ideas!!!
True, I like fuckmonkeys more than Catholics.
Tuxedo loves a good hug. Thanks!
Thanks you for the meatball joke! You and I think alike; a rare breed.
We like Jeopardy but not Kate and never quack doctor.

@Mitchell
I think Carlos wants the food to be as spicy as his life, but my stomach sometimes disagrees!
He’s got his aging health issues, Tuxedo, I mean, not Carlos, but he’s doing fine.
I’d like Thing #45 to tour the country and be in every county fair and carnival dunk tank in the US. Or, be the mole in Whack-a-Mole.
He’s a good looking meatball, no?

@Helen
The vet says there is no arthritis, it’s a loss of muscle density in his back and hind legs, so he’ll be wobbly sometimes as he continues to get older.

@VRCooper
He will be toning down his spice usage; he’s promised.
Thanks for the Tuxedo thoughts. He’s a good boy.
Fredrik is a bit lean, but maybe he’s a lean meatball.

My, that rice was really spicey!!!! What ever happened to just butter?

I had a diabetic cat. Found out when he began peeing all over the house. The shots were a pain. Keep in mind that diabetes in cats is not the same as diabetes in people. Their pancreas can start working again. After 4 years I stopped the injection and Max lived to be 21 years old.

@Dave
Luckily the tests came back negative for diabetes.

And I get questioned for cooking rice in tomato juice, Carlos and I should compare notes on cooking. Great collection today. I hope Tux can be made comfy and happy.

@Travel
I may try rice cooked in tomato juice!
Tuxedo has a good plan in place with his vet and still is a loving, terrorist, cat!