story/photo: mLive
also: Lascari: My Marriage is a Non-issue in Midland
Posted by Bob at 5:00 PM 7 comments:

Look! Up in the sky! It's a plane: RFRAs Around The Nation

Look! Up in the sky! It's a plane: Mike Pence Stumbles

The heat is still on in Indiana with Governor Pence, who gleefully signed his Religious Freedom Restoration Act [RFRA], surrounded by real-life anti-gay bigots though he says the law isn't anti-gay.

Uh-huh. But, since the backlash against Pence and the state, he's come out ... see what I did there? ... to say he'd like the law clarified.

Funny; you'd have thought he would have asked for clarification before signing discrimination into law?

And then, this weekend, talking with George Stephanopoulos, Governor Pence wouldn’t … couldn’t … answer definitively if the law was anti-gay.

Just sayin'. Oh, and before I foregt: #BoycottIndiana
Posted by Bob at 1:30 PM 4 comments:

Of course, I don’t mean the way Starbucks CEO Howard Schultz wanted to talk about it. I like the idea of a conversation about race, but I don’t like the idea of my barista starting it just because he wrote #RaceTogether on my latte cup. And I guess Schultz didn’t like it either, or else his business suffered when the program went into effect, because Starbucks has stopped the practice scarcely more than a week into it.

Okay … so if we aren’t talking race while sipping a mocha frappuccino, when can we talk about it; and should we?

I say yes, and I’ll give you just one example why:

One day a co-worker was complaining about a guy who was working in her yard. Oh, he wasn’t doing anything bad, but she felt she needed to be home while he was there in case he decided to break into her house and steal something … because he’s Mexican, you know, and that’s what they do.

I said to her, “You know, Carlos is Mexican, right?”

And she literally smiled at me and said, “I know, but he’s one of the good ones.”

Yeah, we need to talk about race; and not just the anti-immigrant racism, which tends to be aimed at the more brown-skinned immigrants because they don’t look like ‘us,’ but also the blatant racism against anyone of color.

We have college students singing about “hanging n*****s from trees” while on a bus ride, and just a few weeks later Otis James Byrd, a black man, was found hanging in a tree in Mississippi.

The two aren’t related, I don’t think, but how can we say we have no race problem in this country when fraternities sing about it and black men are being lynched in Mississippi.
To be fair, no one knows if Byrd killed himself or was murdered, but his body was found strung up by a bedsheet just a few hundred yards from a house where he once lived.

And what about all these shootings of black men, young black men and children? If these shootings were reversed — black officers shooting unarmed white men — you can bet there would be outrage across the country, but when it happens to a black man, the outrage arises mostly from the black community.

Where’s the white outrage, or just plain outrage, at young men being shot dead, or choked to death, in the streets or in a park or at a Wal-Mart?

I know it’s a tough conversation to have because people have to choose their words carefully, lest they appear to be racist, but why not allow folks to stumble over their words during this talk? And then, why not educate the people about their racism? Why not call it out when you see it and hear it? Why not take a stand against people who want to hold anyone down, push them back, because of their skin color?

It’s like with that co-worker of mine. Carlos is ‘one of the good ones.’

I said to her, “If a Mexican man breaks into your house and steals from you, it isn’t because he’s Mexican, it’s because he’s a thief.”

You aren’t a criminal because of your skin color; you aren’t less than because of where you come from; you don’t deserve to be shot down in the street because you look menacing.
That’s the conversation we need to have, and one way to start it is to eliminate certain words from the conversation. And they are words we all use from time to time and yet, when you listen to the way they are said, you’ll see what I mean:

I think I told this story here once, about a client who was talking about Obama; this man is a Republican and a racist, though he’s not one because he’s the other, he just happens to be both.  But, when Obama was running for president in 2008, this man, while doing business with us, actually said to me, “I hope he doesn’t get elected,. Because all of them people will be dancing in the streets.”

He muttered something about 'them' people being a different color.

I said, "Oh, I got that, but what I'm saying is that the people doing the dancing in the streets aren't just black, and they aren't just 'them' people; they're people ... like me."

Different, yes, because we're all different from one another in so many ways, but we're all people, human beings, just the same, and we should all be treated the same.

We don't need Starbucks to start the conversation, we just need to speak up when we hear racism, see racism. Start talking then.

The best way to have a conversation about race is when you hear someone say something racist. Take that second to educate them; take a minute to explain that the color of your skin, or your accent, doesn't make you any 'less' than anyone else; they just make you different.

Miss Jones Has A New Perch

When we first adopted Consuelo Roca-Jones ... from an elderly woman who could no longer care for even a wee cat ... her name was, gulp, 'Molly.' Luckily, after a quick chat with 'Molly' we realized she was actually Consuelo Roca-Jones and all was well and good.

But, along with Consuelo, we got a scratching post upon which she could take out her frustrations. Trouble was, she preferred using a chair, a good chair, for that, so we bought her a very modern looking s-shaped scratching apparatus.

Consuelo Roca Jones still uses the chair as a scratching post ... though only when we aren't home so we never catch her ... and has begun using the scratching tool as a chair.

But, she does look purty resting there ... 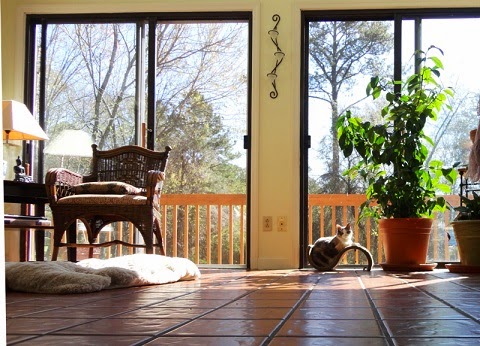 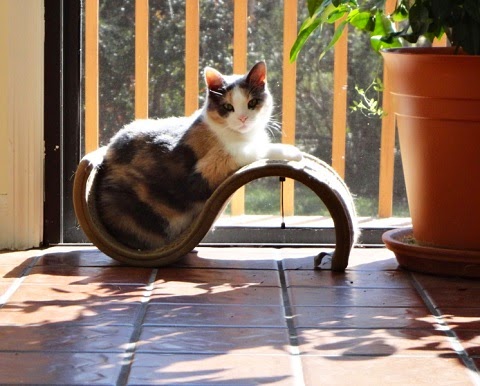 photo via The Washington Blade
story via WaPo
Posted by Bob at 8:00 AM 6 comments:

I ♥ Audra McDonald ... For This and For That

Look! Up in the sky! It's a plane: Phil Robertson

Look! Up in the sky! It's a plane: Indiana's RFRA