The Quitter Goes To Fox 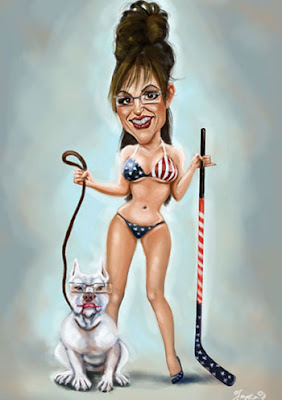 The Governor Of Alaska Who Couldn't Govern Alaska, Sarah "Moose Mess" Palin is taking her special brand of inanity and nonsensical-sense to the one place where she'll fit right in.
Fox News.
The Quitter won't have her own show, but she will provide commentary, of the entirely one-sided and usually inept variety, on some Fox shows. She will, however, host a series that will run on the network from time to time.
So, she'll join Glenn Beck, who can cry on cue but leaves spelling to the third graders, and Sean Hannity, who never met a lie he didn't like to tell, and Bill O'Reilly, who....well, he's Bill O'Reilly.
'Nuff said.
The Quitter, who has consistently blamed the media for her failure to become Vice President, or continue on as governor, apparently missed the irony in the fact that she will now become a member of the very group she blames for everything, saying, “It’s wonderful to be part of a place that so values fair and balanced news.”
Oh! So she'll be doing comedy.
Never mind.
Posted by Bob at 9:30 AM

Carrie Prejean will probably be her co-host! lol

I found it ironic that she is now part of the press. Ugh. When is she going to go away. I can safely say I will never watch her.

I can't wait for her to have a breakdown on live television. Is it mean for me to wish that?

I, for one, can hardly wait! I'm also kind of ashamed to admit it - the kind of prurient curiosity that compels you to look at a car wreck.

She will provide commentary? ROFLOL!

More than likely she will parrot carefully prepared sound bites, to an audience full of fellow idiots. They will eat it up though.

I'm am pretty sure she is not quick enough to be part of the "gotcha" media. So in true Palin fashion if you can't beat them join them, then quit....

Heaven help us all!

Well, at least it should give us some blog fodder! >:]