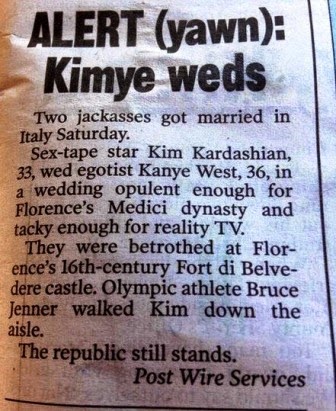 All right, before I throw up in my mouth, let’s dish about last weekend’s Kardastrophe Wedding … and marvel at the way the New York Post announced the pre-divorce ceremony. Sex tape meets ego. Gotta love it!

Kim and Kanye exchanged vows at Forte di Belvedere in Florence, Italy in front of a wall of flowers, though I don’t think anything masked the stench of impending doom.

Andrea Bocelli sang as Kim walked down the aisle, and I think for the first time in his life, he was glad he couldn’t see. Harsh? Maybe, but I stand by the words.

Bruce Jenner walked Kim down the aisle, his face pulled tighter, his hair more lustrous, his Adam’s Apple less prominent than Mother of the Bride, That Woman. But Bruce hated the whole affair because he was bored out of his mind and felt he was only used as a prop for the Wedding Episode on next season’s Keeping Up with the Kardastrophes.

Meanwhile, That Woman held NorthSouthEastWest and sobbed because her meal ticket was now someone else’s meal ticket.

The Hounds of Hell, Khloe, Kourtney, Kendall and that other K were Kim’s bridesmaids and each pocketed a handsome check for doing so. 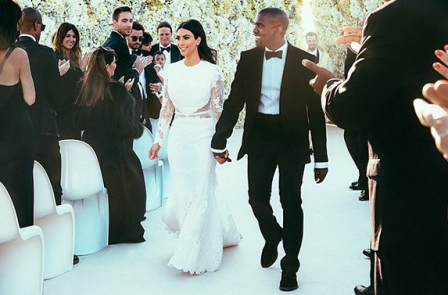 Kim wore a custom-made Givenchy gown designed personally by Riccardo Tisci, Kanye’s long-time companion; Tisci also designed a little dress for NorthSouthEastWest just like Mommy’s … a picture that will surface again in about twelve years when the little girl enters therapy. Tisci also personally made Kanye’s tuxedo and I heard special attention was paid to the inseam, with several measurements taken and private fittings right up until the ceremony began. Snark? I think Tisci got the last laugh, though, because Kanye's shirt looks too big and Kim looks like a Vegas stripper.

At the reception, a nervous Kanye — perhaps realizing he was marrying the woman in the white dress and not the man who made the white dress … ALLEGEDLY — gave a 20-minute speech which he recorded for release on his next album; seriously though, he ranted about how hard it is being a media whore married to a media whore:

“They feel like it’s okay to put you on tabloid covers to sell your image, to use you in an SNL spoof…We don’t negotiate. We’re not like that. We’re not stupid… The Kardashians are an industry!… We are warriors! There is not one person at this table that has not had to defend us at some point or another…At this table…the combination of powers…can make the world a better place… [they are] the most remarkable people of our time… [Kim is] the ideal celebrity…the ideal art… [Imma gonna be] spending every single day of [my] life with Kim. … We don’t negotiate. We’re not like that. We’re not stupid.”

The most telling line of all? “The Kardashians are an industry!” Well, Kanye, don’t be surprised about all the fleas because you're laying down with dogs. 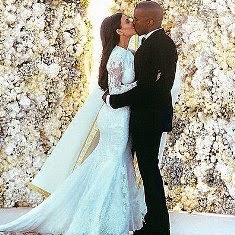 Kanye surprised Kim by flying in Lana del Rey to sing three songs, including “Summertime Sadness” and “Young and Beautiful.” Lana sang for free, though I heard she would get paid on the back-end when this thing implodes.

Rob Kardashian, Kim’s only brother, left before the wedding due to some family drama regarding his recent weight gain and Kim’s emphatic rule that no fatties be in the family photos. See, Kim wanted everyone to look a certain way, all glammed up in Valentino couture as they left Paris for Florence, but when Rob couldn’t fit into his suit, Kim ALLEGEDLY lost it and then Rob lost it, too, ALLEGEDLY shouting at Sex Tape, er, Kim that he was “sickened by Kim and Kanye’s display of wealth and clothes and beauty and called it ‘superficial bullsh-t’”

Um, Rob? Have you met your sister and Kanye before that day? They are the queens of superficial bullsh-t.

Khloe cried when she heard Rob was leaving the festivities and tried to convince him to stay, making excuses for Sex Tape’s behavior, you know, cuz she was a bride and all. Except, um, Khloe? Did you forget this was her third marriage? I mean, she should be used to it by now; it’s as easy as lying flat on your back to create a name for yourself.

Anna Wintour also skipped the wedding because, well, she’s Anna Wintour and she don’t look at ugly … ever. She will, however, ALLEGEDLY, use pictures from the pre-divorce ceremony in an upcoming edition of Vogue, possibly in a piece entitled What Not To Do At Your Wedding.

Rachel Roy was there. Beyoncé and Jay-Z were not. Hmmm, maybe that Solange elevator beat-down soured Jay on his “friendship” with Roy?

Beyoncé and Jay-Z thought the whole extravaganza was pretty tacky and so they went on vacation to the Hamptons, though Bey Instagram’d a photo of her new braids that say I’d much rather be on a hot beach than at your, er, wedding and a face that said another thousand words, before Instagramming a photo from the Kimye Vogue shoot with this message: "Wishing you a lifetime of unconditional love. God bless your beautiful family.”

Notice though she doesn’t even mention their names? Shade. More shade? Bey didn’t Instagram one thing, not one thing, when Kelly Rowland got married. Yup, Beyoncé says more by saying less than anyone else; now if we could get to a less-is-more singing style … ?

Rumor has it the whole thing cost about $20 million, with the E! channel and Ryan Seacrest picking up the majority of the tab because media whores don’t pay, y’all. Odd, though, because I think Kim will ask three-times that amount next fall when she and Kanye divorce.

After the deal-with-the-devil, the couple took off for Ireland on a pre-divorce-moon, though baby NorthSouthEastWest didn’t tag along. She girl flew back to California with her granny, That Woman, and has probably been returned to the attic where she lives most of her days all alone.

And, so there you have it, a lavish waste of money for a Fat-Assed-Sex-Tape-Star marrying her Big-Headed-Might-Be-A-Friend-Of-Dorothy-Rapper.

But, let’s end as we started, but this time with the ad that New York Sports Clubs placed to congratulate the happy couple on their road to divorce. 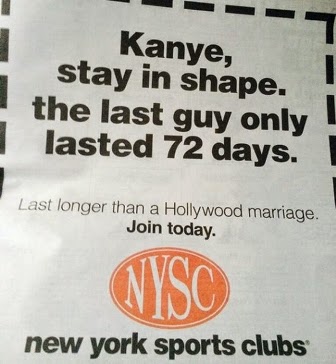 Would You Hit It?

Email ThisBlogThis!Share to TwitterShare to FacebookShare to Pinterest
Labels: Hot Men, Not Hot Men, Tom Cruise, Would You Hit It 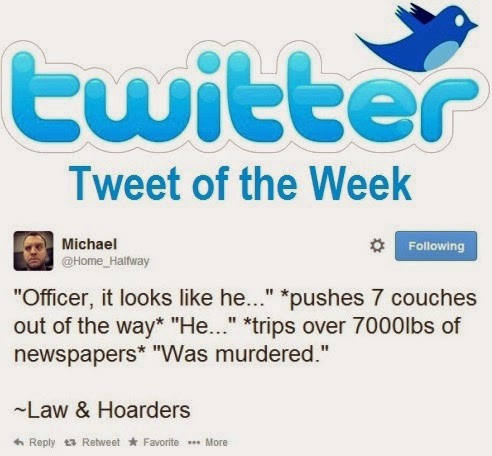 Photo of the Week: Huge Ackman

Email ThisBlogThis!Share to TwitterShare to FacebookShare to Pinterest
Labels: Hugh Jackman, Photo of the Week, Suggestive

At St. Andrew Elementary School, a Catholic school in Bucks County, this year’s graduation dance had an Oscar theme, and the invitations to the dance featured this year’s Oscar host, Ellen DeGeneres.

And, realizing what they had done, you know sending out a picture of a lesbian to the parents of their schoolchildren, St. Andrew Elementary School principal, Nancy Matteo, rushed out an apology email and then asked that each and every invitation be returned to the school at once.

So they can be destroyed.

In her email, Matteo told parents it was "completely wrong" to use DeGeneres' picture since Ellen “lives her life outside the teachings of the Catholic Church."

Um, but you picked her. You didn’t know Ellen DeGeneres was a lesbian? Seriously? Perhaps not, because the email never once mentions Ellen’s orientation though she has been out publicly for seventeen years and legally married to Portia de Rossi for six years.

Matteo, to make sure the parents know this was just a slip and she would never ever allow a lesbian’s picture to enter the homes of children in her care, says she was "obviously NOT thinking" when she let the invitation to the June 8 dance be distributed with DeGeneres’ photo.

"Perhaps I was distracted by the Oscar."

Then she calls Ellen a "poor role model” in the email:

"A role model, as defined by Webster's Dictionary, is a person who is unusually effective or inspiring in some social role, job, position, etc. This does not describe her at all. We work so hard to be good role models and then I go and do something stupid!"

Apparently, Nancy Matteo, whose head is permanently stuck up her homophobic, out-of-touch, doesn’t know pop culture, ass, won’t speak to the press about her faux pas. But she wants everyone to know that she has demanded that every single invitation be returned to her at once so she can personally destroy them.

After, I’m guessing, she takes them home, tosses them on her bed, and rolls around on them all nekkid and shiz.