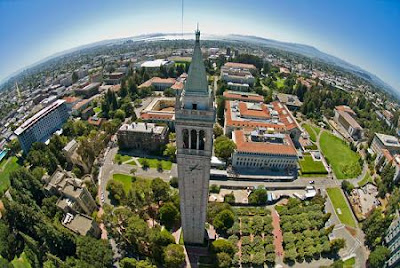 As a wee gay boy growing up in California's Central Valley, I'd often heard tell of a magical place called Berkeley, where there was a university filled with "radicals" who marched and protested and held sit-ins.
I didn't know from radicals, but they sounded fun, and, big plus, they were right across the bay from Mecca.......San Francisco. I longed to be a radical. But then Berkeley stopped making news for the outrageous things that happened there. Oh, it was still a fun place....I saw many a great concert at the Greek Theatre on the UCB campus, but Berkeley wasn't so openly radical. Maybe they settled into middle-age over there. Maybe Berkeley grew up, and moved on.
But then this happened:
The city of Berkeley, by a City Council vote of 7-1, mailed coat hangers to 20 members of Congress last week in protest of the anti-abortion amendment in the House version of the federal health care bill.
Metal coat hangers were mailed with a protest letter to members of the House of Representatives who voted in favor of the amendment but have a history of supporting abortion rights. The amendment would ban coverage of abortion for those who would receive government-run health insurance. It would also forbid people from choosing a private plan that covers abortion if they receive federal subsidies to pay for the insurance.
Berkeley's back, baby!
Posted by Bob at 9:00 AM

My college roomie married a student from Berkley - he went bobbing around in SF bay in raft protesting something that was huge in the water - destroyer, air craft carrier or the like. She, who was a pharmacy major, used to study drugs via flash cards. He'd pick one up and exclaim 'I took that. And that. And that.' Explained a lot.

Good for them! Hope that protest is effective.

After ten years of teaching, and on the side knowing a Berkely grad casually, I finally got to work for him. I think I loved him because he loved my work and because in education he was a true Berkeley thinker.He got things done! And he let me get things done! He was fearless.His faculty, students, and parents loved him. The administration breathed a great sigh of relief when he left.
good to hear this news about Berkeley.
xoxoxo Charlie

Glad they are getting some edge back, I think that is healthy.