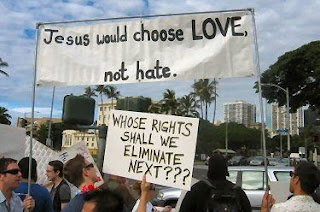 Out west....waaaaay out west in Hawaii....the state Senate has passed a civil-unions bill by a veto-proof majority of 18 to 7.


The bill will allow same-sex and opposite-sex couples to enter into a civil union and receive the same rights, benefits and responsibilities as marriage under Hawaii state law. The House passed a civil union bill last session that only applied to same-sex couples; House leaders say they will wait and see what what the Senate vote was before deciding whether to move forward on the Senate version of the bill.


State House Speaker Calvin Say says the Democrats will meet in private caucus to decide how to proceed. he says one of the factors will be whether the House can muster a two-thirds' majority--34 of 51 lawmakers--to override a veto.
Last session the House voted 33 to 17 on civil unions, with one lawmaker absent.


Speaker Say, who supports civil unions, said he would recommend that the House not
attempt to address a technical flaw--the flaw being what date the new bill will go into effect--in the Senate version and decide simply whether to send the bill to the governor.


Lt. Gov. James "Duke" Aiona, a Republican who opposes civil unions, of course, said the Senate vote was at odds with the people of the state. "Instead of redefining the institution of marriage, legislators should be focused on improving public education and balancing the state budget."


Perhaps, "Duke", when everyone is treated equally under the law, you'll have nothing but time to focus on other issues facing the state.
Posted by Bob at 12:30 PM