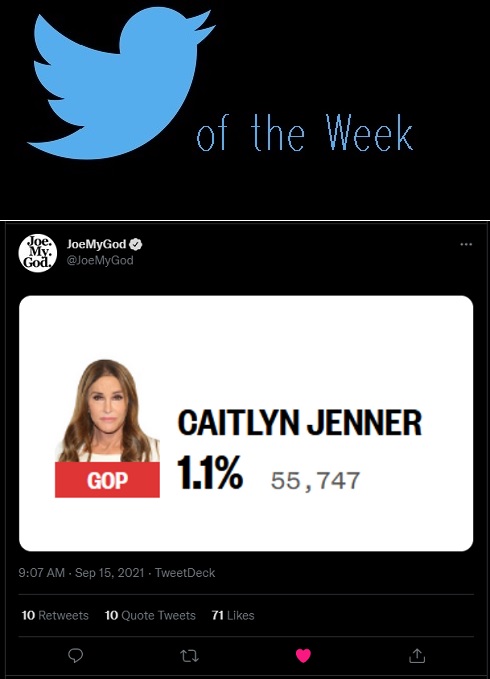 And I agree with what you said about Democrats. We shape it and have gained huge numbers of new dems. So if we lose anything...its our faults and to blame if we don't get put and vote? How bad do we want change and sanity? Then vote.

Clearly, you and your Dad are the brains in the family.

To be fair to the Rabbit Killer the Supreme Court is not FULL of bigots - there's the three Dem justices along with all the bigots.

I am so sorry your brother and family have Covid and wish them all the best. I hope they not only have survive but have an easy time of it. That being said, there's a small voice way down deep in the ugly dark recesses of my soul that says, well, you probably can guess. Have a safe trip!! One more day, and then we MOVE!! Can't wait.

You guys are brave to fly with so many crazies there.

I can't believe 56,000 people voted for Caitlyn Jenner, even if that IS a tiny percentage of the total.

Not to usurp Duchess Deedles' role re. your typos, but I feel I must point out "children wearing masks in pubic." (The last word being the problem.)

LOVE the pic of the groom watching Speedo man! Hilarious!

Good for your dad for standing up for his own safety. It's amazing how different people can be even within families, isn't it?

Tiniest violin for your brother and his family having caught the hoax. It happens.
Tux is right. Amy is telling the Handmaiden's Tale while tellings us she is not. We see her.
Voting is FUNDAMENTAL.
And I can understand that groom looking at that beauty in the speedo. I would have done exactly the same.

@Maddie
And the Caitlyn whined on Twitter that California deserves what they get. Sorry, bitch, you lose.
We gotta show up and vote every single time.

@Helen
No, but the bigots have the majority.
They will not “see the light”. My brother still thinks it’s a hoax, still, and my sister-in-law gets her medical advice from the internet.

@BloggerJoe
I agree with you about my brother. I love him, but you can’t fix stupid.

@Frank
Well, it is the fastest way to get out there.

@Steve
Some people will vote for their favorite reality star. I mean, that’s how we ended up with Thing 45.
Damn spell check. Thanks Steve =) I'm off to fix that!!!
My dad suffers no fools. Perhaps I got that from him.

@Six
Thanks for the tiny violin violin that they won't even hear.

Covid is like the Chicken Pox, if you're not vaccinated, you're going to get it.

Amy is not only a hack, she's a whore for the Republican party.

I understand Caitlyn was pissed she only got 1.1%, personally, I think that's too high and call voter fraud.

Miller... from France. That's a plus. They smell so good... grrr. But this one? No. I would tie him up and smack his bottom until he cried, though. I like making pretty things cry.

YAZZZZ. Vote. Glad that turned out the way it did. Destroy the repulsivecan party!

I wonder what his bride thought about this... or maybe she's in on it and the wedding was just a scam to get free stuff.

NBC News just showed footage of a recent School Board Meeting in Florida... oh, the drama. I love how these people think they are being victimized. I wish I could be there to withhold the ventilators...

Can't watch any of that awful reality show stuff... even the fake talent contests are awful. I remember I used to scratch my head when I saw the stuff the do on television in Japan... hell, honeys... we got them beat now. Just a shite show.

This is what I do every morning. My post goes live at 6:00 am... at about 7:30 am, I will go in and read it... and do a final edit - after a bunch of people have already looked at it. I always feel like such an idiot... the stupidest stuff. And I never see it until after its been live for a good hour and a half.

Your brother is a tool and a fool. His poor family. Keep them away from your poor Dad... get a restraining order. The Ex has a cousin who never visits his mother. He got covid right away... and then got it a second time... and then came to visit his mother and gave it to her! I figure he must be desperate for the rest of his inheritance.

Anyone who worked for the orange ogre should be jailed and charged with crimes against humanity. Although I do enjoy all the dirt... like when the orange ogre asked about sending over a nuke to China before he got out of office...

I was not aware that she spoke at the McConnell Center... huh. Conflict of interest much? She's a terrible human being.

I am like Carlos... I lose it with phone agents. That's why I do all I can not to talk to them. I was so grateful when our IT department at work got smart and invested in live chat... you can't scream at someone when you type... all caps do not count.

Kizzes. Thanks, hon. I learn so much reading your feed.

Don’t you wish you have an audio track of Carlos and his conversations?
I’m as always with Tuxedo.
What a shame about your brother and his family.
I’ve never heard of an SC rub down. Is it what you need after living in South Carolina for too long? Will you and Carlos have to have one before you fly west?
Sadly, “Daughter of One of the Wives” will probably NOT be admirable growing up in that house, unless she’s smart enough to appreciate how awful her mother’s quest for fame is. But, “I’m not a B-sian” IS good.I
Wedding photo: I would have gone for a swim.
Rafael Miller: Yeah, I probably would. But only to ask him about the shorts (as I peeled them off very slowly).

@Dave
Oh, I think there are enough morons to vote for Caitlyn, but if she was counting on the LGBTQ+ vote, I also read that over 85% went for Newsome.

@upton
Stupid people exist, and they vote for stupid people like Caitlyn Jenner.
You’re killing me … making him cry!
When Blues vote Blues win. That is simple. Do it.
I saw that bride and thought, “She knows.”
I am shallow enough to admit that I like some trash TV, and yet even find most of it too trashy for me.
I usually write posts in a Word doc and use that spell check but it doesn’t check for context …like in this post where I mean children in public schools and it came up children in “pubic” schools. Oy!
I love my brother and his family, but you are so right.
Oh, I enjoy the dirt n Thing 45, too, but to sit idly by watching him destroy this country for his fat little dicked ego just so you could write a book? Fuck no.
Barrett is a disgusting lying hypocrite.
Oh he was fine with the agent, he just wasn’t listening to her.
xoxo

@Mitchell
If only I’d thought to record Carlos all these years. Think of the book I could write!
I feel badly for my brother an family, but I also feel like they kinda served it for acting so recklessly.
I hope the rundown doesn’t involve bleach and men in hazmat suits … wait a sec.
Re: Rafael. You dawg!

Great one's today, thanks I needed that.

First, that Vietnamese Student's response was brilliant... we should all wanna be her when we Grow Up! As for your Bros. Family now having The Rona due to Covidiocy... it's Sad but inevitable, isn't it? Your Dad was Wise to set boundaries, we won't allow Covidiots in the Home either, don't Care who they are, not Welcome. They will have to risk dying horribly on their own and not Sharing their potential for a voluntary Death Sentence with those trying to stay Safe and Well. I think the ReTrumplicans hijacking the GOP and killing off their constituents with Lies and Misinformation in droves is the Death Knell for them... they have to cheat now, suppress Votes or have an Insurrection to ever Hope to have a Voice now, they've gone too far and they know it... and the threat they now pose to a Healthy Democracy is no Joke tho'.