Well, Sunday night is the Golden Globes, and I loves me some Globes because drunk celebrities are fun. Especially when Ricky Gervais is hosting. 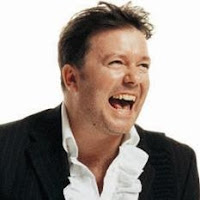 Ricky has already pegged some of his targets for this year's show, and they include old standbys like Mel Gibson and OJ Simpson, though this time around Charlie Sheen has made the infamous list.
Ricky Gervais: "Well, Charlie Sheen has obviously put his head above the power pit. Like last year, Mel Gibson was a gift from the comedy god. So yeah, that'd be two good people out of the audience -- Mel Gibson, Charlie Sheen, O.J. Simpson."
And while Gervais isn't afraid of any backlash for his oft-times off-color jokes, there are some celebrities he will not take on: "I only go for the weak and the feeble. I'm not going to have a go at Russell Crowe or Mickey Rourke. Mickey Rooney, maybe. Betty White, I'm not scared of her. You've gotta choose your targets wisely."
This should be good.
Drunk celebs, Gervais, and a snark-fest!
Who's in?

Paris Hilton is threatening to overexpose herself yet again, with yet another "reality" show. Though this time, she swears, that the show will focus on the "real" Paris. 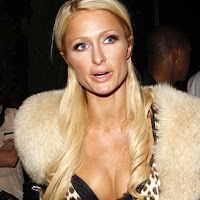 Apparently the Oxygen channel has nothing better for the public, and has decided to air 'The World According to Paris' which is said to Hilton living her "real life," as opposed to the "character" she played in her first foray into realty TV with ex-best friend Nicole Richie, 'The Simple Life.'
Paris Hilton: "When I did 'The Simple Life' I was playing a character that I created, and I had no idea it would last so many seasons, so I had to continue doing that character, so I think people assume that's really how I am. But when they see this new show they're going to see the real me."
The "real" Paris?
The drunk Paris"
The arrested for cocaine possession Paris?
The questioned about marijuana possession Paris?
The sex-tape Paris?
The flashing her vah-jay-jay Paris?
Oh, yeah, that's not a character.
"It's a show like I've never done before. I'm really letting cameras into my real life, and it's just a really all-access pass into what goes on," Hilton said.
Like Paris scrubbing toilets in prison? 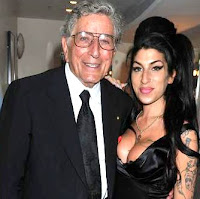 Is there anyone with whom he won't record a duet? I mean, haul your butt to Smallville, Tony, and let's do a little 'I Left My Heart in San Francisco' for the next album. Could it be any more of a trainwreck than this:
The New York Post--that bastion of truth and honesty--is reporting that Bennett is gearing up for a duet with, wait for it, toothless drug addicted soul sensation Amy Winehouse; Bennett claims she's a big fan of his work, and confirmed the recording by saying: "We're working on partnering up to record a duet together, but it's still in the works."
And by 'in the works' he means if Amy can stay off the smack and out of the rum bottle.
Now, don't get me wrong, I love La Winehouse; love that voice. But, she is still a trainwreck, so I wonder what Tony is thinking.
Tony's wife, Susan Bennedetto, says that Winehouse "went to see him twice while he was performing in London."
Well, hell, if that's all it takes to get a duet with Tony, then I'll start stalking him all over the country.

New York Press film critic Armond White isn't making friends in Hollywood these days. In fact, his outspokenness--he seems to hate everything--came to a head during the New York Film Critics Circle Awards when Black Swan director Darren Aronofsky chastised White from the stage and a teary-eyed Annette Bening begged for everyone to "just get along." 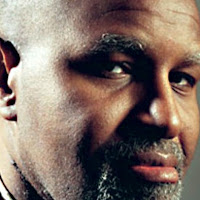 The tense evening ALLEGEDLY started when White, chairman of the Critics Circle, brought Aronofsky onstage to present an award to Black Swan cinematographer, Matthew Libatique. Aronofsky, ALLEGEDLY bitter after White's negative Swan review, said, "Keep it up, because you give us all another reason not to read New York Press."
Audience members said Aronofsky was laughing and grinning as he said this, perhaps meaning it as a joke, but Diva Armond wasn't having it. He stepped up to the mic and said: "That's all right. Darren reads me. That's all I want. And because he reads me, he knows the truth."
Armond White is one of those critics that most people agree, likes what people hate, and hates what people like. Case in point: he liked Jonah Hex. Y'all remember that movie? It was in the theaters for about a minute last year and was trashed by critics and audiences alike, except for White. White also gay Toy Story 3--which is apparently 2010's best reviewed film--one of it's three negative reviews.
He sounds like a cranky diva.
Armond also made it quite clear how much he disagreed with some of the night's winners. When Blue Valentine actress Michelle Williams was awarded a prize, White only talked about her work in 2004's Land Of Plenty, which caused the actress to mutter, "I made that movie almost 10 years ago. I can't imagine what you've said about me since then if you had to go back that far to say something nice."
Then, when White brought Angels in America playwright Tony Kushner onstage to award director David Fincher's The Social Network with the Best Picture prize, he said, "Maybe [Kushner] can explain why it won best picture."
Then came Annette Bening, who accepted the Best Actress prize for The Kids Are Alright. She ALLEGEDLY began to lecture White, and other not-so-nice critics, about being "mean little s**ts" and then went all Rodney King, and begged the audience, "Can't we all just get along?"
Hmmm, awkward.

Jermaine Jackson is in a bit of a pickle. 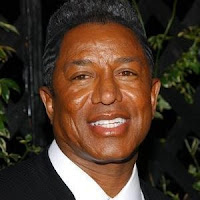 An African pickle.
A being behind in child support payments pickle.
Jermaine went to Africa for some reason, and while he was there his passport expired. No big deal, right? Except he was unable to renew it because of the 2008 order his baby momma Alejandra took out, which required him to pay $3,000 in child support. Now, of course, he's ALLEGEDLY $100,000 in arrears, so he's stuck.
In Africa.
Sources say that the American Embassy will issue temporary papers to a U.S. citizen in special circumstances, but as for now, Jermaine is stuck.
Hmm, what about his children and his utter lack of financial support? Are they entitled to some help?

It seems like Tom 'I Used To Have A Career And Now It's Over' Cruise and Katie 'Someone Get Me Away From This Crazy Man' Holmes just might boycott the Oscars this year. 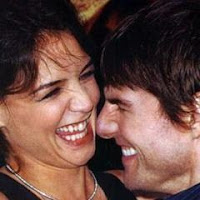 Why, you ask? Something to do with Scientology and space ships?
Something to do with the fact that one of them is a has-been and one of them is a never-really-was?
Nope, it's all ALLEGEDLY because Anne Hathaway is co-hosting the show this year and Tommy and Kattie are upset because Anne did a spot-on impersonation--and an unflattering one--of Katie when she hosted SNL last year.
And the Cruises don't like being the butt of jokes, although you'd think they'd be used to it by now.
Sources--and by sources, I mean Suri--say that the couple used to be friends with Hathaway and supported her when she split from her then-boyfriend, Raffaello Follieri, in 2008, but now feel let down because of Anne and SNL, and jokes about Katie.
They're especially upset that Anne didn't warn them the impersonation would be on TV.
Poor Tommy and Katie.
Strike the death knell. 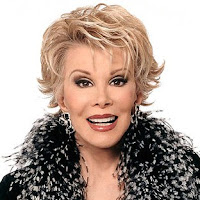 Joan Rivers doesn't care what people are wearing anymore.
According to the Hollywood Reporter, Rivers--who's practically an awards-season institution on red carpets--says she and daughter Melissa Rivers want to move on from dishing about designer duds.
Except, of course, I hope, on the Fashion Police [E! Friday nights at 10:30 eastern. Check your local listings]
As Melissa explains: "We've done that. It's not fun anymore."
So, what will those wacky gals do now?
Take a page from Paris Hilton and star in their own 'reality 'show about Joan moving in with Melissa. The  show, 'Joan and Melissa: Joan Knows Best', will premiere January 25 on WE. Again, check your local listings.
Joan says the main reason the Rivers girls are quitting is because everyone takes it all too seriously now. "When we were doing it, you could tell Julia Roberts, 'I hate your dress.'" but now the star's publicists will "ice you" if you say anything remotely unflattering.
Furthermore, after Lisa Rinna took over a TVGuide broadcast covering a crowded red carpet in 2007, morale slipped further. Joan says: "When I found myself literally pulling Nicole Kidman's arm away from--who's the one with the big lips?--I thought, What am I doing? Take your stupid lips and take these movie stars."
Seriously? Lisa Rinna? 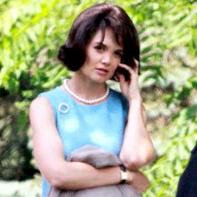 After A&E Television spent millions producing an ALLEGEDLY highly anticipated mini-series The Kennedys, starring Holmes as Jacqueline Kennedy and Greg Kinnear as JFK, the network that was set to air the show, The History Channel, decided to scrub it.
Sources, and again I mean Suri, said: "Upon completion of the production of 'The Kennedys,' History has decided not to air the 8-part miniseries. After viewing the final product in its totality, we have concluded that although the film is produced and acted with the highest quality auspices, the dramatic license the series takes is not suitable for the History brand. We recognize historical fiction is an important medium for storytelling and commend all the hard work and passion that has gone into the making of the series."
In other words, it boils down to this: Katie Holmes is no Jackie O.

I forgot about the Golden Globes. I'm going to my BFF's place that afternoon for drinks and football.

Armond White sounds more like a psychopath than a diva. Who in their right mind would like Jonah Hex?

This is the same History Channel that airs UFO Hunters?

Ummm.....Golden Globes? If football is on, thats where im at! But seriously, I had to look it up, had no idea what so ever what the golden globes even was.