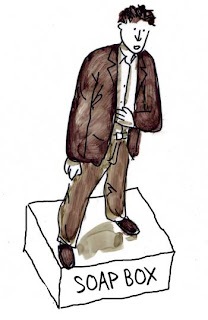 Signs that the world is coming to an end?
Birds are falling from the skies.
Fish are dying in the rivers.
Calvin is still on The Fashion Show.
Seriously.

I returned to work yesterday after nearly three weeks of scabbage, shingles, pus, and pain, and was greeted with open hostility.
Seriously.
One co-worker was furious that she had to cover for me.
I so wanted to remind her that Shingles is quite contagious, quite painful, and, had it gotten into my eye, I might have gone blind, but she was too busy ranting and raging about being put out.
Seriously.

The GOP is taking control today and their first order of business sis to repeal "Obamacare" and replace it with their own ideas.
Seriously.
But, yeah, um, GOP? Where were your ideas when this was being voted on before?
Oh, right, you were too busy pouting and saying NO NO NO to actually come up with your own plan.
And, you do realize that the Senate won't follow your lead, and Obama can veto your vote, so why do this at all?
Oh, it's symbolic. Yeah, that helps the country.
Seriously.

It was just last summer when Claire Buffie was named Miss New York and announced her 'platform" for her reign would be "Straight For Equality: Let's Talk."
Seriously.
Now, Buffie, a board member of NYC P-FLAG, will be the first-ever Miss America contestant to compete for that title in the name of LGBT rights.
Seriously.
Now the pageant may be more gay than ever!

It seems that after the blog-o-sphere erupted yesterday with the news that Chick-fil-A was sponsoring an anti-gay hate-fest in Pennsylvania, that the restaurant--and I use that term loosely-- has had it's name removed from the fliers promoting the event, and the company is said to be "looking into the matter."
Seriously.
What's to look into? Are you, or are you not sponsoring the event? That shouldn't take long.
And removing your name from a flier doesn't mean you aren't sponsoring the event, it just means you are advertising your sponsorship.
And does anyone seriously believe that a company whose mission statement says they "exist to glorify God," or sell chicken, and has been a major contributor to Focus On The Family for many years, really needs to investigate this?
Seriously.

Tea Party favorite, complete wingnut, liar, and asshat of epic proportions, Michele Bachmann is said to be considering a run for president.
Seriously.
Apparently Bachmann plans on traveling to Iowa this month for meetings and advice from political forces close to the caucus process before coming to a decision regarding a presidential run.
Seriously.
She makes Mama Grizzly Bear look like a member of Mensa.

T.S. Eliot called it a masterpiece.
Ernest Hemingway pronounced it the source of "all modern American literature."
What is it?
Mark Twain's Adventures of Huckleberry Finn.
Okay, but did you know that Finn is disappearing from grade school curricula across the country? Did you hear that it has been relegated to optional reading lists? Can you believe it has been banned outright?
Why, you ask?
For the use of the n-word.
Now, for the record, that word, for me, is one of the most offensive, and even though I love to use offensive words, I have never used that one.
But to ban the book, hide the book, shelve the book, because of the use of the n-word, is equally offensive. The book was written at a time when that word was commonplace, and not at all deemed offensive. It should be read, enjoyed, and discussed for the content of the story and the context of the era in which it was written.
Seriously.
But now, Twain scholar Alan Gribben and NewSouth Books, want to release a version of Huckleberry Finn, in a single volume with The Adventures of Tom Sawyer, that does away with the n-word, as well as the in-word, as in Injun, by replacing them with the word "slave".
Gribben says this "is not an effort to render Tom Sawyer and Huckleberry Finn colorblind," when, in fact, it's an attempt to sanitize the book. But, when does it stop? Will we rewrite all great books and remove any passage which we find offensive today, even though it wasn't offensive when written?
Seriously.
How can we move ahead when we are bent on changing the past.
Posted by Bob at 9:00 AM

I have another end of the world news story for you
http://tinyurl.com/2em3uy7
River in Canada turns bright green.

I have a friend who works for a wildlife non-profit, and she says the blackbirds died because they were startled by NYE fireworks. They can't see well at night and whole clusters of them flew right into the display.

as for the fish, it happens way more than we know. Pollution lowers the oxygen levels and they suffocate. Weird, right?

Okay, I'm done with my science lesson-by-proxy. So glad you are feeling better! xoxo

That's unreal and wrong to edit, censor, or ban Huck Finn. I've taught that novel and others that included language representative of the characters and time. There's a reason for its being in there, and teachers are there to facilitate understanding. Students are not being educated any more,and this is another example of why.

I guess I'm in the minority, but I think the removal of the n word from Huck Finn is a good thing. I think it's better to have an edited version of the book taught in schools than no book at all.

I think if Mark Twain were here today, knowing the importance his book has had over the last 125 years, he'd be agreeable to replacing the 219 instances of the n word with the word "slave".

Time for Calvin to go

We are WAY too politically correct these days. I say we just ban the people that want to ban Huck Finn

Glad to see you're back at work, and that coworker can put a cork in it. Sickness happens.

I'm really looking forward to Michelle Bachmann running for President. She will provide hours and hours of comedy material to Jon Stewart and Stephen Colbert for the next two years.

Bob, I'm completely against banning books, hiding them behind closed doors, or altering them from the original content. Huck Fin is a classic. It is also racist and has the "N" word.

Unfortunately, it needs to stay as it is, so people don't ever forget where we have came from. We need context now more than ever. To erase that ugly word, that ugly truth, would be to erase the trauma, the suffering, the struggle, and the eventual triumph of all those who have been and will be oppressed.

This is the perfect opportunity to seize a moment to get students fired up and help them learn about our nation's very checked history, but it looks like we'd rather hide in a corner with our hands in our ears pretending it didn't happen at all.

Since its too late to give your nasty co-worker Shingles, perhaps you can tell her you'll try not to get another life-threatening illness so as not to inconvenience her. B*tch.