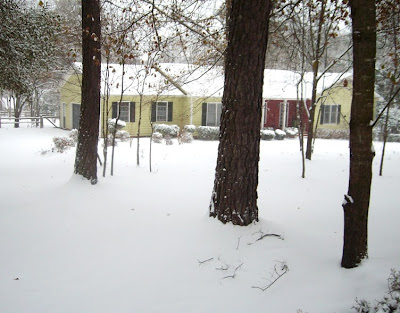 So, we got snow again, for the second time this winter. That hasn't happened since we moved here. So, then, what's all this talk about global warming? It's colder, people, not warmer [sarcasm/font]
But what is funny is how South Carolina shuts down when it snows. Before one flake hit the ground the news crawls were closing all the schools, banks, Post Offices--whatever happened to their mantra of delivering the mail through any kind of weather? Carlos' boss called Sunday afternoon; his office would be closed because of the, ahem, storm.
The storm produced about six inches of snow here in Smallville; very pretty. And I get it that people here aren't used to driving in snow, and county vehicles are equipped for driving in snow, but it's funny that a few inches and they roll up the sidewalks and close it down.
Carlos' boss called again last night and said that, with the threat of icy roads, his office would be closed today, too. Carlos now has had a four day weekend, and i think he's going a little crazy.
Anyway, here are some pictures of Snowpocalypse: Smallville:

We have our own OMG-Storm moving in tonight - though we are more likely to have a two hour delay for schools instead of shutting down.

You are very lucky I think. You live in a place where the snow's beauty can be appreciated for a day or two, then quickly become nothing more than a memory.

The 6-12 inches we are supposed to receive tonight will be piling on top of all the garbage which hasn't yet been collected THIS YEAR.

Wow! That's a lot of snow for you Bob. Hope you can get some enjoyment out of it.

It looks beautiful. I wish for just one day it would snow where I live but whenever it rains during the winter the temperature rises above freezing.

Yeah, doesn't take much to shut down southern states when it snows. I hear Atlanta is a mess right now and they don't expect to get things moving until Thursday or so at the soonest.

And when I was in North Carolina over the holidays we got 7" of snow there. It paralyzed the area for 3 days.

Whoa! I had forgotten all about snow days. I sure did love them as a kid. Thanks for all the pretty pictures of someone elses snow!