Caleb Laieski: Standing Up, Fighting Back 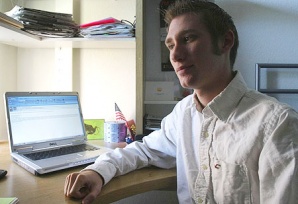 Kids get a bad rap these days. Everything from their hair, their music, their clothes, their language, gets knocked....Wait! That happened to me when I was a kid. But I digress.

There are kids today doing great things, the right thing, the just thing. And one such kid is Caleb Laieski, who at age fifteen is a teenage activist for LGBT rights. Caleb who wrote a letter to officials at every school in Arizona that they need to put a stop to bullying of gay and lesbian students or face a lawsuit.

Caleb Laieski e-mailed more than 5,000 school administrators, city-council members and state lawmakers demanding improved measures to fight discrimination. Caleb let these officials know that LGBTQ youth face more bullying than their heterosexual peers, and he offered to refer officials to organizations and experts that would help them combat the problem. He also warned officials that they must institute policies specifically prohibiting LGBTQ harassment by students, teachers and administrators, and that schools that fail to stop bullying will encounter "legal ramifications."

Caleb, who founded Gays and Lesbians United Against Discrimination when he was just thirteen, says he isn't threatening school officials, but is simply offering them solutions and resources to fight the problem. But he is insistent that any school that doesn't cooperate will face legal consequences.

Caleb's activism was successful at his own school, where policies were changed in his district as a result of his own experiences with bullying. At Willow Canyon High School, Caleb endured harassment almost daily--he was shoved into lockers and received text messages with anti-gay slurs--and believed district officials should have done more to stop it.

In March, 2010, the American Civil Liberties Union of Arizona offered to represent Caleb in a potential lawsuit against Dysart Unified School District, but the district soon revised its student handbook to include language prohibiting bullying of LGBTQ students.

Now Caleb hopes to reach out to every school, and every student in Arizona. With the help of a friend, Casey Cameron, Caleb hopes his group can provide more services for LGBTQ youth, such as counselors and a homeless shelter. But he said he is "absolutely" ready to initiate a lawsuit in specific situations: a suicide or attempted suicide because of bullying, expressions of hate from teachers or administrators, and inadequate punishment for bullying.

Kids these days. Their clothe4s, their hair, their music, their language. The way they stand up and fight against bullying.

It gives me hope.


Office of the Superintendent,
As I am sure you are aware, nationally we had twelve [12] successful suicides within the Lesbian, Gay, Bisexual, Transgender, and Questioning (LGBTQ) community nationally and thousands of attempts in the month of September.


As a gay youth myself in a public school system, I have endured threats, harassment, and much more – leading me to defend students of diversity, as I know all too well the feeling of enduring such non-sense and have also lost many friends to suicide due to bullying.

Many students that are currently enrolled within your school district are enduring bullying, harassment, hate speech and statically potential physical harm or threats.

Might I bring some issues to your attention that you may already be advised of:

Protection against peer pressure and bullying by students and teachers alike is required by law and administrators have a duty to intervene when students are subjected to a foreseeable risk of harm through acts or omissions, when in school and when walking home.

Schools administrators may be held liable if they are "deliberately indifferent” to anti-LGBTQ harassment or discrimination. See Flores v. Morgan Unified School District, 324 F.3d 1130, 1135 (9th Cir.2003). Further, the costs of ignoring anti-LGBTQ harassment can be substantial, and plaintiffs in such litigation have been awarded hundreds of thousands of dollars in damages and the school district agreed to make extensive policy changes and provide training for all staff on how to avoid and appropriately respond to harassment, and to pay more than one million dollars to settle the suit.

We seek by this letter to remind the District and the school of  its obligations under state and federal law to provide a safe campus for all its students.

To systematically redress the hostile climate for students who are, or are perceived to be, LGBTQ in the District’s schools and comply with applicable laws, the District is urged to take the following steps:

1. Ensure that all District bullying, anti-harassment and anti-discrimination policies specifically include sexual orientation and gender identity.
2. Distribute a letter to all teachers and staff immediately, informing them of their affirmative responsibilities to maintain a safe and learning environment for all students, which includes those who are, or are perceived to be, LGBTQ, and the steps they should take to intervene and address anti-gay harassment whenever it arises.
3. Have suicide and bullying prevention resources available in a known place.
4. Increase staff training on how to properly handle, report, and discipline hate speech or bullying of any kind.
5. Increase student involvement and education to prevent bullying and understand the percentage of diversity within their classroom and school.

If we are acknowledged of any of the following, a suit will promptly be sought:

1) A suicide attempt or success due to bullying
2) Issue of bullying or harassment reported and not handled properly, or inadequate punishment given
3) Teacher or administrator failing to intervene or are expressing hate themselves.

We would be happy to refer you to organizations and experts who could work with you to develop and implement an appropriate long-term plan to create schools that are safe and productive for all children enrolled within the school district.

Please have your counsel contact me no later than Monday, December 20th about the steps and plans to be taken.

if anyone can please send me the emails of some anti bullying organizations across canada and the united states here is my email
donnybennett93@hotmail.com