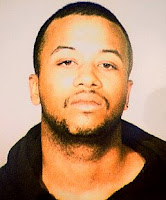 Keith Phoenix, one of two men who attacked Ecuadorian immigrant José Sucuzhañay [original post HERE] and his brother Romel with anti-Latino and anti-gay slurs in Brooklyn back in 2008, was finally convicted this week of second-degree murder as a hate crime and attempted assault as a hate crime.


Phoenix's first trial ended in a mistrial, because, apparently, his beating of a man to death because he was maybe Latino and maybe gay was too hard for that first jury to decide.


This time Keith Phoenix was convicted on the top counts he faced and he faces as much as 40 years in prison for the murder; he will be sentenced August 5.


Hakim Scott, who helped in beating José Sucuzhañay to death was, sadly, convicted only of manslaughter and attempted assault, but not as hate crimes; he will be sentenced in July.


How anyone could say this wasn't hate is beyond me. If it wasn't anti-gay, it was most definitely anti-Latino, which....is...hate. How you could hear the story of two men, who beat a man to death because he was walking arm-0in-arm with another man, and not see it as a hate crime, is unfathomable.


All crimes are hateful, this one was hate.
Posted by Bob at 2:30 PM

i agree with you