New York Attorney General, Andrew Cuomo, has announced that if he's elected governor this fall, he would push to legalize gay marriage in New York during 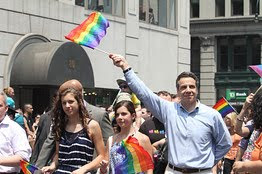 his first year in office. When asked about marriage equality, he said, plainly: “It’s a priority.”

And though he does admit that state lawmakers have plenty on their plates right now, especially with budgetary issues, Cuomo does think a marriage equality bill could pass the Legislature in 2011, an off-election year.


It was just last December when the New York State Senate rejected a gay marriage bill in a lopsided 38-24 vote, a defeat for advocates who had waged a long, expensive campaign and had won pledges of support from Senate Democratic leaders. Naturally, not a single Republican voted for the bill, but what hurt was that eight Democrats opposed it.


So, Andrew Cuomo's affirmation of working towards marriage equality is a good thing, even if he has always been on our side. See, he hasn't always been for lack of a better word, a fierce advocate for LGBT rights. When he ran for governor back in 2002, he opposed marriage equality, while saying he favored civil unions. It wasn't until 2006, when he was running for Attorney General, that he declared his support for marriage equality.

Obviously, this is very exciting for us New Yawkahs. I'm totally gay for Andrew and - barring any unforeseen weirdness - he should be a shoo-in.

The extra sparkly frosting bonus to all this, of course, is the possibility that we may get the delightfully quirky and always slightly-insane doyenne of can openers and table-scapes, Sandra Lee, as our semi-homemade First Lady.

Don't be jealous, now. We need some fun in our lives up here after the prolonged NY Senate clown car ride we've been on.

This is great news. I hope Jerry Brown can do the same here in California.