It's a little late, but I saw this on Gawker and thought I'd share it: 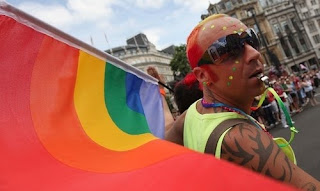 A Straight Person's Guide To Gay Pride
by Brian Moylan
If you are a opposite-gender lover you may not know this is Gay Pride Weekend in New York. You should come join the party! But first, here are a few things you need to know before joining the fun.
If Halloween is Gay Christmas and the Oscars is the Gay Super Bowl, then Pride is Gay Fourth of July. There are picnics and fireworks and lots of drinking and it's all about freedom! Pride isn't really one single occurrence. Much like Mardi Gras in New Orleans, it is a collection of parades, rallies, parties, private events, functions, fundraisers, and bead throwing. So, one doesn't so much "go to Pride" as one "does Pride." Every gay observes it differently, but it really is the one time of the year when all the leather daddies, bull dykes, twinks, alternaqueers, trannies, drag queens, femmes, circuit boys, bois (who are actually girls), and all the other wonderful gay archetypes rub elbows in a giant celebration of living somewhere over the rainbow.
While the day is all about being gayer than Liza Minnelli singing "Single Ladies" in a Sex and the City movie, we love it when our straight allies come out and lend their support. If you want to join in, here are some handy tips to keep in mind.

lol
I love it!

LOL! I've never seen the ground rules before but I love them.

Mind Of Mine said...

I love Pride Season, almost as much as I love this post.

The gay BLOG Back2Stonewall took this entry and published it and acted like they wrote it.


Thanks for giving the proper attribution.

This is absolutely brill.
Good work!