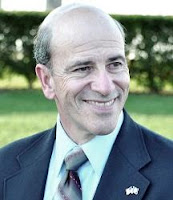 Giuda is under fire after making comments to a group of students in which he compared same-sex relations to that good old homophobic, bigoted, dimwitted, asshatted view of bestiality.
Giuda had just finished speaking at Rivier College when a group of students approached him and challenged him on his ignorant, backwoods, moronic view of gay rights, and he responded by saying: "I believe marriage is strictly between a man and a woman....What's going to happen next? Men and sheep? Women and dogs?"
Yes, because we all know that as soon as the homos get the right to marry--and rest assured we will Bob Giuda--we'll move on to animals, and when we can marry animals then we'll move on to inanimate objects like Bob Guida's brain.
Guida has since tired to deflect his asshattedness, by saying his comment "was made in the context of a discussion about institutionalizing marriage."
Oooooh. Well, that makes it okay to compare homosexuality with bestiality, I suppose.
Bob Giuda now says he could have chosen his words better and admitted his comments could be considered offensive to same-sex couples.
He said: "The point was, it's not to our good as a nation or society to institutionalize relationships that do not involve a man and a woman for the protection of a family."
Because we all know that gay people can't raise children and be families and have families. Or, at least dimwitted, dumbassed, asshatted, living in the past, moronic, bigoted homophobes like Bob Guida think so.
Posted by Bob at 8:30 AM