American Idol Is A Wingnut Magnet 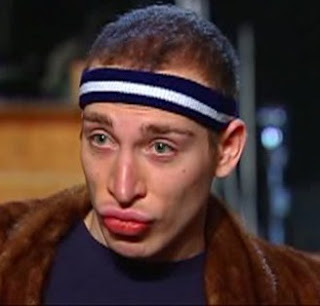 How else do you explain hordes of people who cannot sing appearing during the audition segments of the once -popular, once-semi-relevant show? And how else do you explain the people who cannot sing and appear during the audition segments of the once -popular, once-semi-relevant show turning around and suing the show because they looked foolish?
Case in point: one ginormous Idol reject Ian Bernardo, who auditioned back in 2007, and was subsequently invited on the Farewell Simon season finale as one of the "freaks" who had auditioned for Simon over the years, and is now suing American Idol producers for some $300 million, claiming "workplace" discrimination.
Bernardo claims he was asked to appear on the Idol finale along with a few other memorable "freaks" as part of Dane Cook's not-so-comedic farewell to Simon Cowell. Needing another moment in the spotlight, Bernardo grabbed the microphone from Cook, proclaimed a "Kanye moment" and rambled incoherently for a few seconds about how he was replacing Cowell before show producers cut to commercial.
In the complaint, Bernardo says the Idol producers "exploited my non-conforming appearance and sexual orientation. They did this by directing me to 'gay it up' in any appearance I made on camera [at the finale, and]....although characterized as an 'audition' to the public at large, in fact, I was and was paid as an employee of respondents for each appearance."
See, Ian Bernardo thinks that because he was hired to appear on the finale show, because he was such a memorable no-talent-loser, that makes him an employee of American Idol, thereby making his complaint one of workplace discrimination.
His complaint also says other Idol employees used anti-gay slurs and that the show--which he calls the "workplace" in an effort to make it sound like he was an employee and not merely a badly trained seal--"was permeated with discriminatory intimidation, ridicule, insults and hostile and offensive comments that were so severe as to alter my working conditions."
Uh huh.
Someone is trying to stretch their fifteen minutes of infamy into a half-hour. Someone with nothing but no-talent to stand on.
Posted by Bob at 8:30 AM