Homos To The Rescue 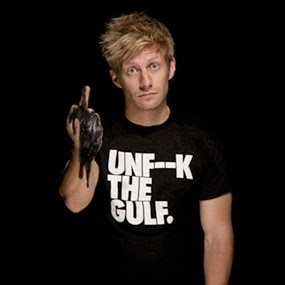 Leave it to a couple of 'mos.

We've all cursed BP over the D-I-saster in the Gulf of Mexico, and now Luke Montgomery is taking it to the next level with his Unf__k The Gulf campaign.

UnF—k the Gulf's fundraising efforts center on T-shirt sales [order them HERE....mine is on the way] and for every $13 shirt sold, $5 is donated to environmental organizations, most of which are actively working in the Gulf.

The abundance of expletives in the duo’s viral video—and particularly the use of children to deliver some of them—has already caught the ire of Bill O’Reilly, who devoted a recent segment on his Fox News show condemning Montgomery for using kids in a F bomb-laden ad. Montgomery’s response?

“It’s patriotic to use the F-word in defense of our shorelines.”

Funny stuff. I was just thinking today that BP booting Briton Tony Hayward and appointing it's first American to the CEO spot is genius. Yup, I hate to admit it, but it's business genius. When the next oil spill happens...and there will be one. All eyes will point to the Big Bad Wolf, America, as the official culprit (even though we already are).