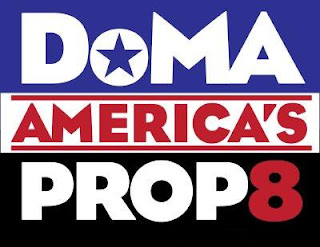 This is big. And could very well get bigger.


US District Court Judge Joseph Tauro ruled yesterday in Gill v. Office of Personnel Management that Section 3 of the Defense of Marriage Act [DOMA] violates the equal protection of the laws guaranteed by the Due Process Clause of the Fifth Amendment of the Constitution.

The Gill case does not seek to outright challenge the right of same-sex couples to marry, but it addresses the discrimination faced by same-sex couples who were legally married in Massachusetts and are subsequently treated differently by the federal government than opposite-sex married couples.

Section 3 of DOMA defines "marriage" and "spouse" at the federal level as
constituting only opposite-sex couples. It reads:`In determining the meaning of any Act of Congress, or of any ruling, regulation, or interpretation of the various administrative bureaus and agencies of the United States, the word `marriage' means only a legal union between one man and one woman as husband and wife, and the word `spouse' refers only to a person of the opposite sex who is a husband or a wife.'.

Judge Tauro: This court need not address these arguments [about whether strict scrutiny should apply in this case], however, because DOMA fails to pass constitutional muster even under the highly deferential rational basis test. As set forth in detail below, this court is convinced that “there exists no fairly conceivable set of facts that could ground a rational relationship” between DOMA and a legitimate government objective. DOMA, therefore, violates core constitutional principles of equal protection.


Similarly, a companion decision in Massachusetts v. U.S. Dep't of Health and Human Services was also issued, with Judge Tauro finding that DOMA also violates the Tenth Amendment and the Spending Clause of the Constitution.


Judge Tauro: That DOMA plainly intrudes on a core area of state sovereignty—the ability to define the marital status of its citizens—also convinces this court that the statute violates the Tenth Amendment.


These are small but important steps on the road toward marriage equality, and equality under the law for all Americans, regardless of sexual orientation.


source
And head on to Joe.My.God. for reaction to the ruling
Posted by Bob at 8:30 AM

"These are small but important steps..." There is nothing small about this. Or even big. This is H-U-G-E.

Now the question is, must the Obama administration appeal this ruling or does it have some discretion? And if there is discretion, will the administration choose not to appeal and let the ruling become binding precedent (in Massachusetts)?

This is big news. There should be a Prop 8 ruling later today or very soon and if it's overturned I'm going to celebrate by telling my straight BFF we should get married.

Cubby,
What I meant by "small" is that this ruling won't suddenly make same-sex marriagfe legal, but it will make inroads in having same-sex marriages recognized federally.
Small step. Important.
But a big step would be that if suddenly it was announced that same-sex mariage was legal everwyehere.