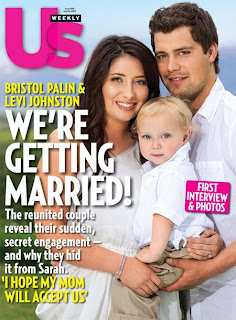 According to that most reliable news source, Us Weekly, Bristol Palin and Baby Daddy Levi Johnston are getting married, but they haven't told The Quitter:

"'We got engaged two weeks ago,' Bristol, 19, tells Us Weekly. 'It felt right, even though we don’t have the approval of our parents.' Bristol and Levi, 20--who famously called off their previous engagement two weeks after welcoming son Tripp in December 2008--tell Us Weekly they reconnected three months ago while working out a custody plan for their 18-month-old son. 'I really thought we were over,' Levi tells Us Weekly. 'So when I went, I had no hope. I think we both just started talking — and then we took Tripp for a walk.' Says Bristol, 'When he left that night, we didn’t hug or kiss, but I was thinking how different it was. He texted me: 'I miss you. I love you. I want to be with you again' ... I was in shock...It is intimidating and scary just to think about what [Sarah's] reaction is going to be. Hopefully she will jump on board.'"

Let me get this queer:
They decided, via text, to reconcile, so I guess that means he FaceBook proposed, and the ceremony will be a la Twitter? But here's what I love about these two dumber than dumb kids: they give an interview to a magazine about their engagement and yet say they haven't yet told Mama Grizzly Bore?
I guess US Weekly isn't one of those many many publications that Palin reads whenever they come across her desk?
Posted by Bob at 11:30 AM

That whole group can go away at any time!! Please.

And those teenage girls, who are the target audience for the (ahem) abstinence campaign? They are all, like, that's sooooo romantic, like, he's so cute, she's so cute, the baby is so cute - everybody is going to live, like, happily ever after, you know?

I just don't understand why we, as a society, continue to 'make' people famous...and why is everyone SO interested in it.

She happens to be the daughter of a dimwit who ran for VP, who got knocked up while schtooping out of wedlock.

(Oh, I guess that would have a bit to do with it after all.)

But they're into their 16th minute. Time to wrap it up.

Wait a minute. Something is rotten in Denmark...as we old timers used to say. Wasn't that him on T.V. a couple of weeks ago blasting the whole damned family? Am I wrong?

gosh I wish shit people and stories like this would just go far away too! WTF and who cares