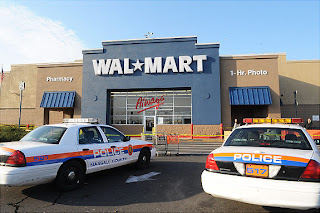 Wal-Mart is for idiots. Or Wal-Mart is idiots.
Wal-Mart has spent more than a year and more than two million dollars in legal fees battling a $7,000 fine that federal safety officials assessed after shoppers trampled a Wal-Mart employee to death at a store on Long Island on the day after Thanksgiving in 2008--Black Friday.
Yeah, two million to save 7,000. That's Wal-Mart. And federal officials are stupefied as to why Wal-Mart is fighting so hard, and so expensively, against such a modest fine. I mean, they've already spent millions trying to stop this from ever happening again before the $7,000 fine was even levied.
In fact, three weeks before the federal Occupational Safety and Health Administration [OSHA] ordered the fine, Wal-Mart, hoping to avoid criminal charges, reached a settlement with the Nassau County district attorney's office that called for the company to adopt new crowd management techniques in all 92 of its New York state stores. In addition, Wal-Mart agreed to create a $400,000 fund for the customers injured in the stampede and to donate $1.5 million to various community programs in Nassau County.
But Wal-Mart is still spending millions to fight the $7,000 federal fine. The company is arguing that the government is improperly trying to define “crowd trampling” as an occupational hazard that retailers must take action to prevent.
So, let me get this queer, Wal-Mart doesn't think stores, who capitalize on these Black Friday sales, and any number of other sales, needs to protect it's potential shoppers and employees on their property?
Okay.
In contesting the penalty--and again, it's $7,000--Wal-Mart has filed 20 motions and responses totaling some 400 pages, and has spent at least $2 million on legal fees. The dispute has become so heated--and Wal-Mart’s defense so vigorous--that OSHA officials complain that they have had to devote huge numbers of staff time to the case, including 4,725 hours of work by employees in the legal office. It's seems like Wal-Mart is spending this two-million-plus to overwork OSHA just make the case go away, because, just in case any other Wal-Mart customers or employees are stampeded upon and injured, or killed, they shouldn't have to do what they've already done in the Nassau case.
It doesn't make sense, and if it doesn't make sense, it's just big corporate greed looking out for big corporate greed at the expense of their own customers.
But, really, do we expect anything else from Wal-Mart?
Posted by Bob at 5:30 PM

If we're talking about their continued practice of having people line up at their front door on Thanksgiving night and the free for all that follows at five o'clock in the morning all in the name of millions in profits it makes as much sense to Wal-Mart as it does BP to hide how much oil has spilled in the Gulf of Mexico to escape potential liability.

In other words, it makes sense to them and them only. That's why I won't shop there unless my life depended on it.

Walmart...I hate giving them any of my $ and try to not shop there....

But I really wanted to pop in and say....THANX AND GIVE YOU SOME BIG LOVE!! Appreciate the kind words and support during this difficult time for me....I love my blog buds! xxoo

That is f**ked up

Wow, I remember when this happened and I thought it was so sad that something so silly like sales resulted in someone's death, and I was appalled that those people didn't notice they were STEPPING ON SOMEONE ON THE GROUND! The way Walmart handled this is obviously terrible, as well, but this whole incidence just makes me feel disgusted by people in general