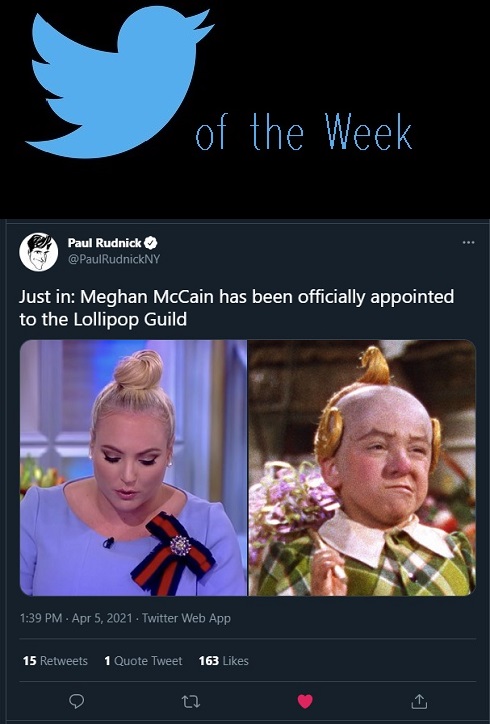 Caitlyn Jenner can stuff it. That bitch will never get my support.

I'm going to enjoy watching Miss Mattie Gaetz crash and burn. I had many a word with him on Instagram back in the elections.

I hate the View...and they would do themselves a favor by getting rid of the fat blond cunt.

And I thought that was a mannequin, not Melanie. But both made of plastic and fiberglass.

While I was not a fan of the outfit Dr Biden wore, she was at least covered up. Melanie Trumpelstiltskin has the morals of a whore.

Ha, I finally figured out who Matt Gaetz makes me think of - that picture did it for me. It's "Mr. Incredible" from The Incredibles cartoon!

I do love Moyle's hair!! Gaetz is a pig, as you said. And Ramsey -- what the heck is going on there?! I always wonder about these people who think their job is to police other people's behavior.

What, no photos of the Croc slippers?

the GQP and the xstains need to tend to their own closets full of lies, never mind what the rest of us are doing IN PRIVATE.

I'm still cackling. One, because Maddie did blow a fuse with the crocs (I have to make a post about that!) and because that tweet was absolutely accurate.
Jake Moyle!!! Whoa. Yes, of course. Damn.
As for the Repugs: no to Caitlyn. Tiniest violin for Gianforte and popcorn for Gaetz and the mess he's in. Also, not surprised about Ramsey Solutions. Fuck them. And fuck the high horse all of them seem to ride in. How dare they clutch their (fake) pearls over a pair of stockings and say nothing about Mel's nudity and gold-digging techniques? Hypocrites.

Oh, dear, sweet Carlos! I would love to hear him say y'all with a Spanish accent. Camo crocs? *SHUDDER*!

El Gato Guapo (E.G.G., for short) can throw some major shade! I hope (fogey that I am) I'm using that term properly.

The skeletons in Ramsey's closet are probably all wearing lacy, pink teddies.

Can you just imagine the uproar if Dr. Biden's outfit was sleeveless or *gasp* tan?!

Meghan, Meghan. My sisters and I all wore that do when we were kids. They were more Afro puffy, but still, KIDS! Daddy would come home and mourn the fact that his six little girls all were wearing onions on top of their heads.
That tweet did make me snort coffee, though.

Oh, and Bobulah, those shoes are indeed cute.

Jake! I approve. He's so pretty!! In so many ways.

Jenner is a joke. No credibility. Coasting on fumes.

Gaetz is such a pig. And we knew that BEFORE his current scandal. He was such a repugnant frat boy. F him.

So, Gianforte won't get so sick as to be hospitalized and will be one of those creeps who walk around and say 'no big deal'. Except it is. Especially to the over half million people who lost a loved one during this crisis. Azz wipe much?

Ramsey. What a dolt. Because I refused to follow the rules you set down for use of your establishment - and it is your business so you set the rules - I HAD to cancel my shindig? Really? A lawyer convinced him that this was going to fly? LOL. Idiot. Hope a judge sends him packing. And I hope that young lady bankrupts his stupid company. The gall of that man.

Are you sure that is Melanie's vag? I heard it came with a biohazard sticker and one that said Property of Putin? And Jill rocks those boots. See... the right? They have NOTHING to work with. So they grab at stuff like a ladies stockings. Ridiculous, in this day in age.

I wonder if Fox News remembers Goya? No, they don't because the current news cycle is all anyone thinks about. There is no introspection, no thought, no big picture look at the world we live in... just sound bytes.

Nice shoes. I am going lace-less. Slowly going all slip on.

Thanks for the feed.

I had no knowledge of the Croc protocol. So glad to be educated. Thanks, Carlos.

Oh, Tuxedo, you're just making too much sense.

The US needs a NEW second party now that the GQP has cancelled Republicans.

Can't wait for all the Ramsey skeletons to come out of the closet.

I loved the sarcasm!

Matt Gaetz... true to himself. Oh wait, I meant SELF-SERVING.

I read the news about Caitlyn Jenner yesterday and groaned. Not that the GQP would ever choose her. But how she chooses them still baffles me. Oh, wait, she's a moron.

Please give Jake Moyle my address.

That tweet is an insult to the Lollipop Guild.

I have to be honest, I didn't care for the fishnets on Jill Biden either. Looks like she is trying to be too trendy, which I applauded, but not with that ensemble. She needs a stylist to give her the polish to be chic, and age appropriate. But I adore her.

How any woman could support that slime ball Matt Gaetz is beyond me.

I thought I heard a huge thud. Must have been the Mistress passing out and hitting the floor from the thought of croc slippers. Has anyone checked on the dear?

@Maddie
I tried to warn you!!
Caitlyn is vile. And to use Wren is sickening.
Gaetz burning would be a worthy bon fire.
Meghan can take her wack-a-doo hair don’ts and her ‘John McCain is my father’ and find new work.
Fiberglass.

@Helen
It wasn’t a great look, but I’d rather see her fishnets over Melanie’s vagina any day.

@Steve
Yeah, Jake’s hair is fabulous; and he has a great smile, among his other attributes.
I always think people who use their faith as a weapon are hiding their own dirty secrets.

@AM
I am Team Jill all day long. Russian whores, not so much.
I willkeep an eye out!
Xoxo

@Six
Maddie and Crocs. I knew I would be on thin ice!
And Jenner and Gaetz and Gianforte can fuck all the way off, and take Ramsey with them.
The GQP as fashion advisors is the best joke of all.
xoxo
@DeeDahLah
Luckily I have never heard Carlos say “y’all.” Seeing him in Crocs is the worst thing he’s ever done.
As for Tuxedo, you are correct and using the term correctly.
I think you’re right about Ransey.
GQP “fashion” heads would explode. Vagina, goodl fishnets, bad..
Every time I see McCain on The View, or in a Tweet about the show, I am amazed by her hideous hair. Clearly her stylist is having a go at her.
Cute kicks, yes!

@TDM
Cano Croc Slippers. I’ve seen it all.
@uptonking
Paul Rudnick Tweets the best stuff; he really skewers Miss Lindsey!
Jake does something for me …
Caitlyn needs a good long sit down.
Gaetz is a smug pig!
I need Gianforte to get sick, real sick.
We do love our Guns here in the US of G.
Ramsey is a pig with secrets.
I loathed Melanie before I saw all of her and it’s worse now. Jill Biden’s panty-hose are this year’s Obama Tan Suit.
I’m sure Fox remembers Goya, but that was different.
My new kicks are lace-less! That’s what I loved.
I am not as bad as Maddie about Crocs but I am close.
xoxo

@Mitchell
Carlos has to be schooled every so often, as do we all.
I love it: Canceled Republicans!
But her shoes were still ugly.
I’m sure Dave Ramsey has some dirtydirty he’s hiding; that’s why he plays the role of Arch-Christian.
Let’s see: no one wears a mask from now on and we don’t shut down: that’s one hint.
I can’t with Caitlyn Jenner.Fame-whore.
As soon as he leaves Smallville.
Yes, as if McCain would be allowed to join!

@Agnes
It was the shoes that got me, but what got me more were Republicans blasting her for them but they never said a word about Nekkid Mel.
Matt Gaetz is on his final lap.
I warned her about the upcoming mention!!!

Re fishnetgate: she was fully clothed and wasn't airing her genitals out in the breeze, so I really do not care. Do you?

Re C Jenner: Your 15 minutes of fame are past. Please have the decency to move on.

And Caitlyn.... someone should tell her no Republican will vote for her.