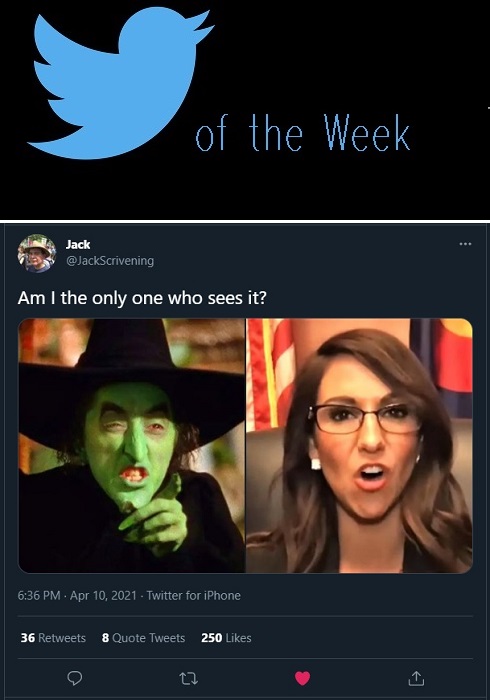 ooooh, the KKK hoods.
and that boebert twunt has GOT TO GO!
have you pulled carlos down off the ceiling yet?

Just imagine; you're the Foreign Minister of a sovereign country and you get a message to the effect that the Sovereign State of Texas wants to send your country an ambassador and open an embassy! Just what we needed you think; perhaps the old US embassy building in Grosvenor Square will do? Then you get told that they are sending Ambassador Cruz! Arrgh no! All bets are off.

@Helen
Texans have long threatened secession and most people respond, "Go then."

Texas AND Florida should secede. STAT.
Tuxedo, right as always.
OMG Bob. I so totally pictured you peeling Carlos off the ceiling.... LOL
The cartoon? Absolutely GQP.
And between you and I, I'm waiting for the other shoe concerning Matt Gaetz falls. Oh, it should be delicious. And they've probably already pick his replacement.

(Carlos) - I'm with you on the SNAKE! business.
(Tuxedo) - Yes. That would have been much better.

As we don't really get snakes round here, I'm with Carlos on that one. And as for Ted Nugent - I'm just speechless. AFTER ALL THIS TIME THAT'S WHAT HE THINKS COVID 19 IS?????

Hee hee. Any reason to post a pic of Margaret Hamilton is a good one.

Oh, my. WES! That is one kissable face. I am in LURVE. Thank you, Bob. You'll be invited to the wedding. PS Don't wear white!

I didn't realize Ted was still able to put words together to form a sentence. Progress. Well, that and... he's a little late to this party, ain't he? Was he in a MAGA induced coma?

I get why Taylor would want control of her songs. They belong to her and she should have had the first option to buy the originals. What they did was underhanded. And who knows... if she's smart? She gives away the stuff for free simply to spite the folks who stole her music to begin with.

Will Smith is one of those Cult Members. But, yay... doing the right thing re: Georgia. Ummm... that movie? Yeah, another Will Smith movie I will never see.

Yay, Kentucky. And, no... Andy is not my cup of tea. But his ideals are! So, who knows... I've based two year relationships on far less.

Huh. I can't believe ANYONE doesn't think Chauvin is guilty. Based on the testimony I've seen? Hope orange is is color.

Allen West. What a putz. And Texas? They can go F themselves.

Aaron looks like an ex of mine. Yes... easy on the eyes. Sweet.

Gaetz. Why haven't they drummed him out of politics yet? This will all blow over and he will be Ted Cruz II.

Tux is one smart cat. He can patrol my neighborhood anytime.

I love me some Carlos.

Thanks for the feed, Bob. Love your blog. Always something fun.

This Carlos story is by far and away the best one yet. ROFLMAO! I’m with you on Will Smith. I’ve never much cared for him as an actor but, as a human, I respect his moving production out of Georgia. And btw, when you blog about The Bachelor’s Colton Underwood coming out ─ and you will, LOL, please don’t offer him the official magazine, toaster, anything. He comes across as a putz who’s had his 15 minutes of fame and is just seeking more.

Don't let the door hit your ass on the way out. And while your at it, take Florida and Arkansas with you. Those three states I can't stand with a passion. Beyond me why my cousins even stay in Texas.

I caught a brief stint of Aaron Rodgers. I don't watch the show, he is handsome as hell, but he seemed very odd on there, and awkward.

But the Carlos story wins the week. The whole story is just so you two...plus you mentioned your in the shower.... If I ever come visit make sure that wreath is not there.

Hey, I'm with Carlos. A goddamn snake crawling up the front door and ringing the doorbell would have me screaming on the ceiling too.

Just though I'd quote Ted Nugent's friend(?) Kellyanne Conway who said on Fox News exactly one year ago: "This is COVID-19, not COVID-1, folks,"... Geniuses... or do I mean GeniASSES.

The Whole Post was hilarious and I needed that hearty Laugh, Thank You, Thank You, Thank You. From Snake Wreaths to Politics. And... why is it that Family Members will trek thru the entire Household to ask us if someone is at the Front Door? I swear they think I'm the only one that could handle a potential Serial Killer whose kind and polite enough to ring the bell or knock? *winks*

@Six
If there was a way to physically remove those states from the land mass, I’d vote for it.
Seriously, the man was on the ceiling.
I think we’ll learn more about Gaetz’s perversions.
xoxo

@Treaders
Yeah, he really REALLY cannot handle even the thought of a snake.
Ted Nugent is an anti-drug ad in and of himself.

@ upton
I’ll take Margaret over Boebert any day!
Watching Wes on TV and I was hooked. I can’t. I made Carlos leave the room!
I think Taylor’s all about the coins and I loathe everything about her.
I agree about Will being Co$ so I was surprised he spoke out against Georgia,
I get cute nerd from Andy and I kinda like acute nerd.
Racists don’t think a White guys murdering a black man has committed a crime because they’ve been doing it for centuries.
Allen and Texas were made for each other.
Aaron’s kinda dumb jock hot, but I don’t think he’s dumb, so …jock hot??
I certainly hope the Gaetz thing doesn’t blow over because he’ll be more disgusting than ever.
Tuxedo has zero fucks to give.
Carlos always makes me smile.

@Boots
Carlos and snakes is always high-larious.
Yeah, Will Smith movies are a No, but Will Smith standing up against voter suppression is good.
I talk about Colton tomorrow, and he doesn’t get a toaster, but he does get some props. And I read today he’s getting a Netflix series, so he’s turning being gay into coins and therefore buy his own damn toaster.

@Maddie
Allen’s always been an idiot, and so has Texas, so they are good together,
I agree Aaron seems awkward, but it’s kinda dorky awkward hot.
And the wreath is down, though the snake is still around somewhere.

@Debra
For some reason snakes don’t bother me, butspiders? No, ma’am, do not.

@Mitchell
I’ll save you a seat next to Carlos!
Yeah, I think Kellyanne and Ted are actually the same person.

@Bohemian
Glad I made you laugh. I consider that a high compliment!

Gaetz.... I don't need to say anything more,
same goes for nugent, and west, who looks like he's prepping to play one of the lollipop kids.

Poor Carlos! I felt a howler monkey scream building inside me at just the thought of a snake slithering into a wreath on my front door! You'd have been scraping me off the ceiling, too! Fuck a snake. Seriously. :)

@Dave
It is a cesspool.

@Jennifer
You were living vicariously through Carlos' terror!!

So there's an aspiring new entrant for your list of 'Attractive Baldies'. Go, Wes, GO! [Oh, those 'Cupid lips'!]

No wonder you love him so much!