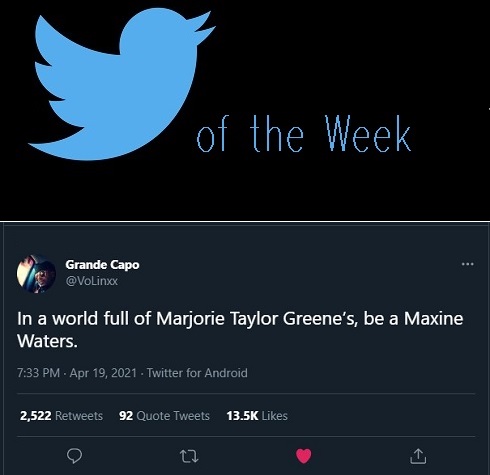 Perhaps Father's heart is as big as Derek Chauvin's?

Carlos cracks me up!!!!!!!!! LMAO!!!!!!! I have friend that belong to a similar club and I have asked kindly they don't invite me anymore. They do nothing racist or wrong, but why does a club or venue not welcome all? Any place they that doesn't help the cause of creating division.

Are we sure they didn't stick the pace maker in Pence's dick to get it pumping?

Chalk another up for the elephants!!!!!!! The horror stories I hear from the Sheldrick Trust are terrible. These damn evil people have no idea how developed and feeling and social elephants are. KEEP TRAPMLING PACHYDERMS!!!!

And this Danilo d'Agostino...if it's a ivory he wants to tickle, I have just the one for him.

I like carlos just the way he is. you two don't need a snooty [dare I say "whites only"] club!

auntie maxine and the elephants and stacey abrams - BRAVO!

Karma is my fav beeyotch!

Ahhh country clubs! I have only been to one once in my life and I felt stifled. Not my vibe. Also, I don't golf or play tennis, so no?
Hahaha Carlos and I should take cooking lessons. We can hurt people with our s-kills.
I cackled at the devil's butler and his balls in a velvet bag. I'm convinced he likes dick.
Love Karma. She does not sisappoint.
And Danilo is dreamy. Insta is useful!

Oohhhh, pre-covid we used to do day trips to Turin to go to the market. I'll have to look out for Danilo - just gorgeous in that hat!

Carlos is going to kill you yet...I will defer to Tuxedo to determine if it is intentional for the insurance money...Stacy Nobel Peace Prize-YES-and lastly that Springdale Hall group is too prissy...Just the idea of my name on a wall and folks can WRITE yes or now on my membership AND annotate a reason for not selecting me is too much...Reminds me of this gay men's professional group I joined years ago...I said to myself I would be a part of it for a year...Just be me...And maybe I will snare a lover...The group met once a month at someone's house...The participation was about 25-50 folks...Some real nice houses all over Denver...Now, mind you if you host you had to have the ability to have a large group...My 832 square foot condo would not do the trick...I would go and come home crying some months...I would try to work the room and then I would stand still and see if folks would chat me up...Granted there were some nice guys but the majority were prissy queens...I dropped out at about 8 months...My soul couldn't take it...

I'm lovin' Carlos to pieces this morning! I feel closed in just watching scenes with country clubs in movies. Do they have lawn jockeys, too? No, probably not. I don't think you two would enter such an establishment if they did.
I'm sure Danilo's Instagram thingy is doing a whole lot of good in the horniverse. He sure made my happy place smile.

I hope Stacey Abrams gets that Nobel Peace Prize!

love the item about Stacy Abrams. No one deserves it more. But cooked cucumbers, when done correctly, are wonderful. Here's a link for Carlos to learn how. From Julia Child herself:
https://www.epicurious.com/recipes/member/views/julias-braised-cucumbers-50121879

I've made them a couple of times and they are GOOD!

Take care, and hugs to you all.

@Helen
I don’t think he has an actual heart.

@Maddie
When Carlos gets funny, it’s high-larious.
Yeah, Springdale was interesting, but it’s not the kind of place I belong, or want to belong.
If Pence’s dick actually pumped, Mother might smile more often.
I stand with the Elephants! Always!
I mean, I have gotten fake $1M bills in the mail, but have never even thought about using it, but you’re right: Tennessee.
I intentionally used that pictures because Carlos and The Cucumber sounds more interesting that Carlos Cooked Cucumbers!
I think Danilo could tickle a lot of things!!

@AM
Carlos is perfection, and while Springdale does have members of color, and gay members [Roger and Thomas] it still reeks of elitism and I ain’t down for that!

@Six
It was a nice trip to the Old South going to Springdale, but it’s not somewhere I’d want to join.
Carlos was re-schooled on cucumbers.
I think Pence does enjoy the mens, too.
If Danilo is on Instagram, I might have to check it out!
Xoxo

@VRCooper
Nah, Carlos loves me too much!! =)
Stacey deserves EVERY accolade!
Yeah, I would never join, ask to join, a group like Springdale. I mean, looking around the room, you see all kinds of people, but then why make the process to join so ridiculous.

@Deedles
As for Carlos, me, too!!
No lawn jockeys, but I imagine that maybe back in the day, they did have them.
The “horniverse”!!! Yes, Danilo lives there!

@Debra
I do, too. She deserves it.

@Joe
Yeah, Stacey deserves mad props from the entire country!
I read about cooked cucumbers, but I cannot, after tasting these, try them again. I will let Carlos cook them oin nights he makes dinner for just himself!

That club sounds like every shitty country club I've ever heard of in South Carolina. You can bet it's full of racist Republican wannabes who miss the "good ol days" which in their mind is like some version of Gone With the Wind. Ugh. No thanks!

I laughed so hard at the poacher who got trampled and Ted Nugent getting Covid. Don't you just love karma?!?!

Oh, and as for the cucumbers in the veggies....I'm sorry but WTF?!?! Hahahah! I love Carlos but I can see why you're sometimes a little irritated!

Ew, that club! I hate those kinds of places. But I think you're a shoe-in. They couldn't possibly have reached their quota for disabled, homosexual, nearly blind Mexicans. (Sorry, but the place sounds hideous.)

And, sorry Carlos, but this time I do agree with you Bob. That vegetable concoction with brine sounds horrid.

Now can we get Karma to run over Ted Nugent. Is it evil of me to hope he suffers terribly from the 19th Covid?

@Jennifer
It's not segregated, but it is exclusive, as far as perhaps wealth is concerned.
Karma is the best, and poachers and Nugent deserve it.
I now know you can cook cucumbers, but that doesn't mean you have to do it!

@Mitchell
His vegetable medley hit a sour note ... [see what I did there?]
Wouldn't it be nice to have those elephants come here and run over Nugent?

(Carlos) (Tuxedo)
I don't like cucumbers in their raw form!
Yeah for Stacy Abrams!!
xoxo :-)

Does Carlos keep you in stiches like the rest of us? He is a gem. But I don't know about cooked cucumbers. Ill take them on my salads and a nice cucumber sandwich first.

I can't believe to ladies tried to break a million dollar bill. How dumb can one get? Don't they know the Federal Reserve Bank of the United States has never issued a banknote of 1,000,000 dollars?

And a happy ending for the elephants. The Mistress is right. The Sheldrick Trust is a wonderful organization doing great work with assistance to elephants.

I often put cucumbers in my stir fry.
And go the elephants. I can understand killing animals for food, but I cannot fathom people hunting and killing big animals.
J

Love me some Maxine. Glad she says what she says. And I adored it when she told Jim Jordan, who was being stupid with Dr. Fauci, to sit down and shut up.

Nugent said he thought he was going to die. Pity.

Elephants. Good for them.

Hmm. Tell Carlos to watch a movie called Thundercrack if he wants to learn about other uses for cucumbers.

Fake bill store... really? How stupid was that clerk. I wonder if Amanda and Linda's real name isn't Karen.

Don't kid yourself. Mother ate those balls on their wedding night. It's in the bible (I'm pretty sure.)

Tux - I hope Abrams win. Did you hear her take on Georgia voting laws this week when she sat for some stupid DC review panel. That lady. She is Barack smart.

I didn't realize places like Springdale Hall still existed. I want to open a bathhouse and operate in the same manner. Tell Carlos I am sure people would only write nice things about him at my establishment.

So, that's what happens when you cook a cucumber, I've often wondered,

Ted deservers far worse, perhaps to meet up with a herd of elephants.

@Agnes Goldberg-DeWoofs
Carlos is a gem, you’re right. When he’s funny, he slays me, but when he cooked cucumbers I thought he was trying to kill me!!!
George Floyd died allegedly trying to pass a fake $20, but these two dim bulbs think some church is just handing out million dollar bills? I can’t.
I love the karma of the trampling.

@Unknown
I read, after that dinner, about sautéing cucumbers, but I think the pepperoncini brine ruined ever trying them again.
Don’t mess with elephants. I don’t believe we have to keep saying that!

@uptonking
Don’t mess with Maxine, she has zero fucks to give …especially to the likes of Gym Jordan.
That was my one thing with Danilo. He’s a cute young boy and, well, yeah.
Maybe next Nugent will get Cat Scratch fever?
Elephants trampling poachers makes me smile.
I’m thinking Carlos knows “other” uses, and they’d be far better than cooking them in brine!!
To be honest, the clerk spotted the fake and called the cops because the ladies seemed to believe it was real.
Mother probably pierced with a very small toothpick and then stirred her martini with them!
Stacey Abrams is the New Maxine, even though we still have, and need, the Old Maxine!
Springdale is a page out of time. It’s welcoming to people of color, and the gays and such, but you still have to PROVE your worthiness. Carlos is used to nice words about him on the walls of the baths!
Xoxo

@Dave
Don’t wonder, and don’t do it!!!
Maybe some COVID carrying elephants?
I don’t care much for private clubs because they keep people out. Open the damn doors already!!!

Carlos is a keeper, even if his cooking is exciting.

Re the club membership: if Carlos is the latinx musician, does that make you Charo? Cuci Cuci!

@Travel
I'll keep him, but watch him in the kitchen! =)

@Will Jay
I could be Charo. I love a good Cuci Cuci!

HA! I love Carlos' comment about the club. I can't imagine applying to such a place. My instinct would be to tell them all to f*ck themselves. Which probably wouldn't get me in. (I had to apply to a co-op board in NYC when I bought my apartment there in 2002, and I found the whole process so infuriating and demeaning. They accepted me, though, so I hid my fury well.)

Also laughing at the cucumbers!

I wish the elephants had trampled Ted Nugent along with the poacher.