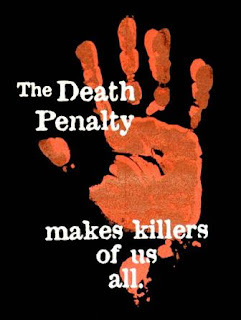 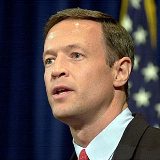 "I don't know exactly what the timing is, but over the longer arc of history I think you'll see more and more states repeal the death penalty. It's wasteful. It's ineffective. It doesn't work to reduce violent crime."—Governor O’Malley

Here’s the deal, well, my deal on the death penalty. What good does it serve? Does it stop murderers and violent criminals? Does it miraculously bring the victims of violent crime back to life? Does it provide closure?

That last one, I’m not so sure about, but I do know that if murder is illegal—and it is—then how is state sanctioned murder acceptable? Murder is murder. And let’s not even raise the issue of anyone being put to death, only to discover, years later, that they were innocent of the crime. Think that doesn’t happen? Well, Kirk Bloodsworth, a Maryland man was the first person in the U.S. freed because of DNA evidence after a conviction in a death penalty case proved his innocence. He is alive and attended the O’Malley news conference.

For me, the death penalty is barbaric. It serves no purpose, it is not a deterrent, and it costs more money than convicting violent criminals and sentencing them to life without parole. There aren’t years and years of appeals, which cost the taxpayers’ money. The criminal is put away, for good. For good.

For me, putting a man, or woman, to death isn’t punishment; they’re dead, they don’t know anything, or feel anything. But, if you take that criminal and lock them up until the day they die, and they sit in prison day after day, year after year, thinking, and reliving, the reasons why they’re behind bars, that’s punishment. Oh, and before you say that these violent criminals have no remorse, I say, So what? They’re still locked up; their lives, as they knew them, are over.

I can go on and on about why I think this way, but the one person who said it better than me is the best person to quote now.

We all remember that Aaron McKinney and Russell Henderson murdered Matthew Shepard in Wyoming in 1998. But, what some may not know is that Matthew’s father, Dennis Shepard, spoke at Aaron McKinney’s sentencing hearing [Henderson, at the time, had already pleaded guilty and was sentenced to life without parole.] With the agreement of Judy and Dennis Shepard, Henderson and McKinney will spend the rest of their lives behind bars. In a statement read to the court, Dennis Shepard said that the sentence means: 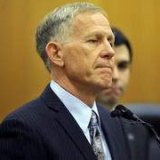 “I would like nothing better than to see you die, Mr. McKinney.

However, this is the time to begin the healing process. To show mercy to someone who refused to show any mercy. To use this as the first step in my own closure about losing Matt.

Mr. McKinney, I’m going to grant you life, as hard as that is for me to do, because of Matthew. Every time you celebrate Christmas, a birthday, or the Fourth of July, remember that Matt isn’t.

You robbed me of something very precious, and I will never forgive you for that.

Mr. McKinney, I give you life in the memory of one who no longer lives. May you have a long life, and may you thank Matthew every day for it.”

That, to me, says it all. And so, today, I’d like to thank Governor O’Malley for his efforts to abolish the death penalty in one more state.

Surprised we still have it. Rarely used - 5 in the last 20 years. And we've had Democrat governors forever. Maybe the new one will get something done.

Those words spoke by Dennis Shepard still touch my heart. It's too bad that others that claim to be religious will never be that powerful!