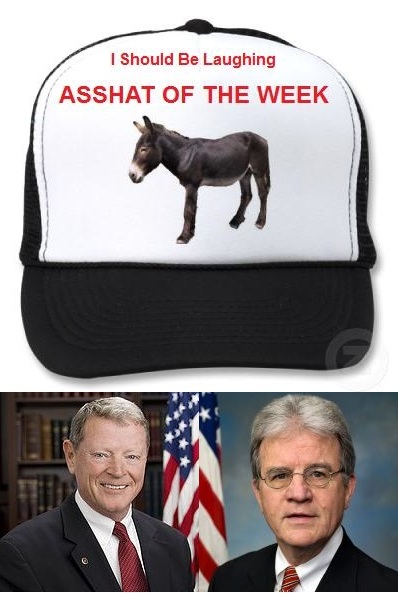 While the town of Moore, Oklahoma is still digging itself out of the devastation wrought by the massive tornado that touched down there this past Monday, let’s take a quick minute to look in on their state Senators, Tom Coburn and  Jim Inhofe.

Coburn, apparently, was unaffected by the tornado, so his decision to require offsets to government spending in the area, before he votes in favor of disaster relief is just good sense, no? I mean, people have lost everything, homes, cars, jobs, family members, and Coburn needs time to think before he acts to send money to help his home state rebuild.

Fifty-one people dead—20 of them children-and Coburn and Inhofe need a minute. When did this country become one that only helps its citizens when the “proper budget cuts” have been made?

In fact, Coburn and Inhofe—both Republicans, of course—pride themselves on being ‘fiscal conservatives’ and have repeatedly voted against funding disaster aid for other parts of the country, most recently the areas affected by Hurricane Sandy. Coburn and Inhofe also oppose increased funding for the Federal Emergency Management Agency [FEMA], the agency that administers federal disaster relief. Coburn complained that the Sandy Relief bill contained "wasteful spending," and identified a series of items he objected to, including "$12.9 billion for future disaster mitigation activities and studies."

You know, to plan in case this happens again and maybe to prevent the disaster from being so devastating and widespread; you know, to help.

This past Monday evening, with bodies still being pulled from destroyed homes and schools in Moore, Coburn spokesman John Hart confirmed that the senator will seek to ensure that any additional funding for tornado disaster relief in Oklahoma be offset by cuts to federal spending elsewhere in the budget: "That's always been his position [to offset disaster aid]."

Coburn Tweeted, on Monday: "My thoughts and prayers are with those in Oklahoma affected by the tragic tornado outbreak."

Thoughts and prayers, but no disaster relief.

Quite a different tune, though, from past years. In January of 2007, Senator Coburn urged federal officials to speed relief to parts of Oklahoma after a severe ice storm, and in 2008, Senator Inhofe applauded the emergency relief efforts from the Department of Housing and Urban Development that was given to 24 Oklahoma counties in light of the severe weather. He said, at that time, "I am pleased that the people whose lives have been affected by disastrous weather are getting much-needed federal assistance."

Now he sings another tune while his constituents suffer.

While I feel sorry for what happened to these residents, it's hard not to think of all the bigoted news you report from this part of the country. And then there's the fact these asshats get another term every time they come up for re-election.

Let's not forget our other frequent subject on this blog, Sally Kern. Surprisingly, Westboro Church beat her to the punch when it comes to blaming the gays for the tornado.

There's lots of asshattery to go around.

Hopefully this will cost him

hope the NJ senators stick it to these asshats; OK didn't want NJ getting any money after Sandy hit. turnabout is fair play, no?

Poor Oklahoma - they have enough on their plate right now.