ExxonMobil Sticks To Its Anti-LGBT Policies 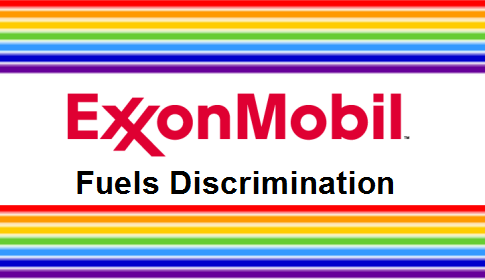 Sometimes, as we fight for equality, we get loud, and we get in your face, and we stomp and parade and demonstrate and get angry. But, sometimes, the best thing we can do is to close our wallets. I mean, do we eat at Chick-fil-A? I don’t—though I never did even before I knew about their anti-LGBT charity work. I also wouldn’t shop at florists who won’t work with gay clients, or bakeries that have a ‘thing’ about baking a same-sex wedding cake. And I won’t be buying gas, still, from ExxonMobil.

This week, once again, ExxonMobil shareholders voted down nondiscrimination protections for LGBT employees at their annual meeting in downtown Dallas by a vote of 81% to 19%. The 19% support for the resolution was reportedly the lowest ever. It marks the 14th consecutive year in which ExxonMobil shareholders have voted down an LGBT nondiscrimination resolution.

On behalf of the New York State Common Retirement Fund, George Wong presented the shareholders with the argument that ExxonMobil should recruit from and retain the widest possible talent pool, including those from the LGBT community.  Wong called it “unacceptable” that ExxonMobil also does not accept the validity of New York state marriage licenses if the employee is gay.

ExxonMobil is the only company to ever receive a negative score on the Human Rights Campaign’s Corporate Equality Index, which rates businesses according to policies and practices affecting the LGBT community. And, let’s also note that ExxonMobil used to have nondiscrimination protections for LGBT employees, as well as domestic partner health benefits, but that those protections were rescinded when the company merged with Mobil in 1999.

And my wallet stays closed to ExxonMobil. Does yours?

If they want to be cold hearted about it then it is going to cost them more money down the road than if they just keep up with the times.

Hell yes, it does. It stays closed to ExxonMobil and to Chick-Fil-A ... always has. It's one thing to be intolerant and another to be openly hostile.

Members of New York State Common Retirement Fund, and other like minded investors, will soon learn that their investments will yield better returns from inclusive companies than from the likes of ExxonMobil.

I agree with The Dog's Mother inasmuch as I believe ExxonMobil will pay a hefty price down the road.

yep, close the purse to these douchebags too!

I gave up on these clowns a few years ago. I don't think they have a gas station within five miles of Casa de R.J. so no worries here.