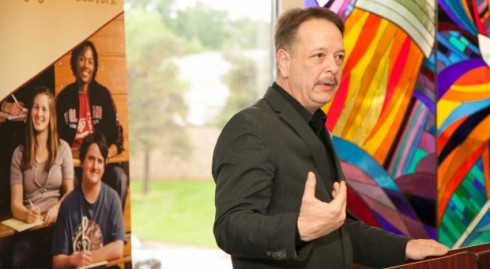 Coming out as gay is a hard thing to do because you never know what might happen. You could lose your friends, you could lose your family, your job, and, sometimes, even your life. I can understand why some folks struggle with the idea, even though the view from this side of the closet door is much nicer.

One person who had a lot to lose by coming out was Gary Meier. In fact, Meier really struggled with staying closeted because the idea of making that announcement could cost him everything he held dear. So he thought about it, and thought about, and even took a leave of absence from his job so he could make a decision. And since we’re talking about it, it’s clear what decision he made.

Last June, the Reverend Gary Meier told his parishioners at Saints Teresa and Bridget Church in St. Louis that he was taking a leave of absence “to discern what ministry God was calling me to do.” He’d already told his boss, St. Louis Archbishop Robert Carlson that he would no longer teach the Catholic Church’s stance on homosexuality.

“I have tried over the years to reconcile my silence as a gay priest with that of the Church’s increasingly anti-gay stance. I have been unsuccessful. I was hopeful that I could find a way to have integrity while remaining part of a hierarchy that is anti-gay — I was unsuccessful.”—Gary Meier, from his book, Hidden Voices: Reflections of a Gay, Catholic Priest

Hidden voices. An apt title because Meier had first published the book back in 2011, anonymously, in an effort to keep his job, and keep his identity a secret. Now, however, the book has been republished with one change: his name is on the cover.

His decision to out himself, in print, and in person, came from watching the Church harden their stance more vocally, and more actively, on the LGBT community. Meier firmly believes that the Catholic Church’s position on homosexuality is a contributing factor in growing suicide rates among gay teenagers.

“My position is that our teaching is causing harm … We ought to own some of that. The church’s hard line against homosexuality causes that kind of damage.”—Gary Meier

Interestingly enough, the Catholic Church, while it has a very clear view on homosexuality, does not have an ‘official’ stance on gay priests; their belief is that a priest must be celibate, and that is all that matters; a good priest is a good priest. Of course, a good priest is also one who stays closeted, and silent, and doesn’t question the faith, but it was because of the Catholic Church’s stance against LGBT rights, including marriage equality, DOMA, ENDA, the Boy Scouts recent acceptance of gay scouts, etc., that Gary Meier questioned his church, and its leaders, and decided to come out.

While keeping the secret from his ‘boss,’ Meier—who recently celebrated the 15th anniversary of his ordination—says his sexual orientation was never a secret to his family and friends. In fact, during his interviews at the Kenrick Seminary, he answered truthfully to questions about his orientation. When he was asked if he could be celibate, he said, “I think so.”

“Celibacy is a rule the church imposes on its clergy. It’s always part of the package. This is not about celibacy.”—Gary Meier

Meier says his only relationship is “with the people of God,” and that he’s been faithful to his vows. He would like to continue with his work in the Church, continue leading his parishioners, those ‘people of God,’ but knows that it’s highly unlikely he’ll be allowed to do so.

“To be a priest and active in ministry, you can’t say what I’m saying. I don’t think I’ll be getting any more paychecks from the archdiocese.”—Gary Meier

And by saying what he says, Meier has effectively removed himself from the priesthood, By standing with gay Catholics, and against the Church’s teaching, and by taking a leave of absence to find himself, understand himself, and accept himself, he has stopped administering the sacraments. But, I doubt he’ll miss it, because what he says now, and what he does now, is the real Gary Meier, not the man behind the robes, the man who, in silence, often, stood with the Catholic Church against the LGBT community.

“I see my speaking out as an act of love toward a community which was born of God’s radical inclusivity.”—Gary Meier

Plus, he gets a copy of The Gay Agenda and the obligatory Coming Out Toaster Oven.

It is sad that a member of the Catholic church cannot be open about their sexuality whatever that may be; that Catholic women are not officially allowed a choice about whether to have children; that Catholics cannot protect themselves against HIV/AIDS by wearing condoms; that women can die because they are not allowed life saving abortions.

The Catholic church started getting more vociferous right after the reforms of John XXIII. You know, the whole Vatican II accords - it took some time but when that mutt Pope John Paul II got in he decided to go all evangelist and discard many of the reforms.

And as a result the church has seen declining attendance. Vatican II made it cool to relate to your priests and nuns and brothers etc. They didn't have to wear the uniform any longer, the doctrine of the church got a little more loose and truly about the love of Christ as opposed to the fire and brimstone condemnations we hear now.

If they really wanted to get people back in the churches they need to lay off the misogynist and anti-gay shit and start not just preaching but doing the central message of Christianity - love one another.

Me, I walked away from the church as a teenager. I knew what it was all about. Decided that if they could be wrong - well, then the infallibility claim went right out the window. Plus I'd studied enough about Catholicism to realize it was all bovine effluent and nothing more. Even told the priest at my confirmation interview that I didn't believe any of it. Got confirmed anyhow.

And if you ever want to read the account of a priest who was both gay and turned atheist, go lookup Heretic Tom.

applause for a man who doesn't want to lie to himself and his fellow humans any more! good on him for telling the catholic church to shove it!