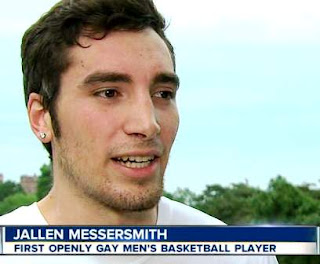 I admit I’d never heard the name Jallen Messersmith, but now that I have I won’t forget it.

He is twenty, the son of Tim and Chantelle Messersmith. He was born  during March Madness and the 1993 run by Michigan's Fab 5 and was named Jallen—pronounced Jalen—in homage to then-Michigan star Jalen Rose. He was raised Mormon, and bullied so mercilessly as a child that he was home-schooled. Now he plays college basketball for Benedictine College, a Catholic school in Kansas, where he was fourth in the nation in his division in blocked shots this past season.

Oh, and he’s gay. Let’s recap, a gay, former Mormon basketball star playing for a Catholic university. It seems like he was tailor-made to be bullied, but he isn’t, even after coming out to his school, and his team, last fall.

"He's a very outgoing player and if you need an example of a hustler, it's him.  He's doing the dirty work for the team. He's getting the blocks on defense, he's getting every rebound. We like him on the team."— Brett Fisher, Messersmith's teammate and best friend

Messersmith appears to be the college basketball player to come out as gay while still playing; Villanova's Will Sheridan came out after he graduated.

"When I came out, there was nobody in my sport I could. I always wanted to put it out there and I had a great experience with it and I wanted to show people it could be fine."

He will admit that coming out scared him to death, but recalls a story he told his friends after coming out, and how they all made it easier for him.

"I had gone on a date the night before and Brett came up to me when there were a group of us and he asked, 'So how did your date go last night?' And I was like, 'Well, we just kind of did this and this.' And Brett said, 'What else did you guys end up doing?' And I said, 'Well, we kind of just did stuff and we had fun.' And he was like, 'No, if I'm going to tell you specifics about what I did on my date, you're going to tell me specifics.'  It told me that I can be open about my personal life and people would listen and give input. It's like nothing different. I'm just one of the guys, who happens to like guys. He eventually got it out of me, though it took some prodding."

It’s that kind of acceptance and camaraderie and chemistry he found in the locker room with his friends and teammates that showed Jallen he could be more open with them about his sexual orientation.

He has a sister, a brother, and two adopted brothers from foster care; there are 23 cousins on his mother's side. His is a big family, and the coming out process could have been a long one, and a difficult one, but his mother says she knew Jallen was different from an early age.

"When I did come out, my mom said she knew that I was different but that she didn't know why. Growing up, I was always the really quiet, shy, nice and sweet kid. The story she brought up to me is when I was younger, I was in dance and tap and I was the only guy in class. All the girls wore pink. I had to wear everything black. I came home one day and I said I wanted to have the pink shoes and they wouldn't let me. At that point, she knew something was different."

Jallen is no longer a part of the Mormon Church, but he grew up in the faith and heard derogatory remarks about homosexuals all his life; at home, however, as if they all knew, his family offered him only love and support.

But he couldn’t get away from the bullying he endured in school. Even as an athlete from a young age, Jallen was taunted for his perceived differences from the time he was about eight until he turned thirteen.

"Growing up, I was always picked on. I seldom had a guy friend growing up. I was lonely and didn't have any super-close friends. Some days I would go to my room and just cry about it. It was something I kept to myself."

Jallen kept the bullying to himself, though his parents soon suspected he was being tormented, and they pulled him out of public schools and taught him at home. He went back to public school for high school, and while the bullying continued, it lessened enough that he was able to endure it through his love of basketball.

"The people making fun of me pushed me into basketball further and made me want to be the best at basketball and get somewhere with myself. After my sophomore year, I didn't care what people thought. I grew stronger because of it and it rolls off my back now."


Jallen was a good enough player to get scholarship offers, and chose Benedictine in part to stay close to his family, though his parents, who haven’t missed a single game, are now divorced. He was still not out, and it took a tragedy to make him look at himself, and understand himself, and find the need and the drive to be open abou8t his sexual orientation.


"My freshman year, one of my teammates passed away in a car accident. When that happened, I looked at myself and asked 'What am I? What am I doing?' At that point, I had accepted that I was gay. Seeing him die young and in such a sudden manner, I didn't want something that was such a big part of what I am to be hidden. I wanted it to be something I was out about, I was proud of being and that people accepted me more. I did not want that to be hidden for the rest of my life."

At the end of the spring semester, Jallen came out to his parents, who were only and always supportive. It was because of their reaction that he decided he could, and should, come out to his team and coaches.

He first told his coach, Ryan Moody, who took the news in stride and, like Jallen’s parents, offered unconditional support. The next day, he told the assistant coaches.


"They were there 100% for me. They said it would not make any difference in the way the team was run. And they wanted to make sure it wouldn't change my experience at the school. That was awesome. After that, I felt like I could do anything."

Anything except have a big coming out scene in the locker room.

"I didn't want to draw a ton of attention. I was going to be gay and have this side of basketball. I wanted it to be that I was still a basketball player who just happened to be gay."

Jallen’s mother helped him come out to the team by telling the mother of his best friend, Brett Fisher, that Jallen was gay. She, in turn, told her son, with Jallen’s blessing.

"I actually was surprised to hear that, but I brushed it off. We were going to be friends forever. I accept him for the person he is. It's still a normal friendship for us."—Brett Fisher

And then the news that Jallen Messersmith was gay seemed to pass from one team member to the next without Jallen having to say a word. He still had mixed emotions about coming out to the whole team, however, because of an incident during his freshman year.

"A year before there was a locker room conversation and one of the guys on the team was having a kid. We discussed if we had a kid and they were gay, what would happen. Things were said like 'I would try and change them' or 'That's not OK.' It kind of freaked me out a little bit. I was not sure how they would respond to that kind of thing."

But his fellow players have also offered nothing but support for him once they learned he was gay; one team mate, in fact, who had expressed reservations about gay people during that discussion, says his mind was changed about gay people when he learned the truth about Jallen.

Now, Jallen Messersmith is gay, and no one really cares. His family doesn’t; his friends don’t; his teammates aren’t bothered. In fact, all anyone wants from Jallen is that he keeps playing basketball the way he’s always played it. Life is normal for Jallen, as it should be, and he even brings his dates to games.

"I would hug them and then I would get grilled by my teammates after. We would have locker room conversations and they would talk to me about guys just like they would talk about girls to each other."

It’s a normal rite of passage; you talk about your dates, you tell your friends what you did. It’s no different from a straight guy telling his story than for a gay guy to tell his; only the genders are different. And like I said, I think as long as Jallen plays basketball to the best of his ability, his being gay is, and will be, a non-issue. He’s not a gay player; he’s a player who is gay. And that way of looking at it is all the difference.

Messersmith and Benedictine had a good season this past year, going 18-12 before losing in the quarterfinals of the Heart of America Athletic Conference tournament. And, despite playing in about just half of his team's minutes, Messersmith led the team in blocked shots, more than the next three players combined. His blocks ranked him first in the conference and fourth nationally in Division I of the National Association of Intercollegiate Athletics, a collection of small colleges that has seen players like Scottie Pippen and Dennis Rodman through to the NBA.

And, while his coming out story seems relatively easy and trouble-free, Jallen is cautious about advising others deciding whether to come out.

And, as we like to do, we’ll be offering you a copy of The Gay Agenda and the obligatory Coming Out Toaster Oven. Perfect for dorm rooms.

via OutSports
Posted by Bob at 5:00 PM

This is why we need all included anti-bullying curriculum for schools.
(And churches). And zero tolerance.

What a wonderful team and bunch of coaches.