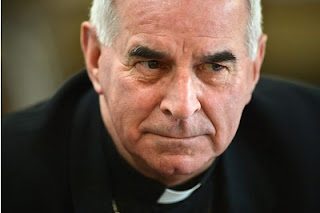 Cardinal Keith O'Brien has been told by the Vatican to leave Great Britain amid concerns of causing further damage on the Catholic Church in Scotland because, you know, he was a big anti-gay Cardinal who was schtupping priests in his off hours and the Church don’t like that stuff.

So, exile it is! A new kind of Leper Colony.

O'Brien had planned to retire to a church-owned cottage, but now he is being forced to leave the country. Hate the sin, you know, and banish the sinner. He was given the news that he was being asked to leave the country while he was in the process of  moving from his, former, official residence in Edinburgh to a residence in Dunbar where he, the Church hoped, would be out of sight, out of mind.

Now, however, they want him completely out of sight. Out of the country, though not on an island somewhere, with other gay priests would join him. Just be gone.

O’Brien’s banishment is proof that the Vatican is reeling that his admission of a homosexual relationship with another priest, as well as allegations of abuse towards trainee priests, might damage the Church. You know, like the child raping priest scandals have been doing of late.

Still, the Cardinal does have some folks on his side. A recent petition organized by the parishioners of Our Lady of The Waves in Dunbar saw more than 90% of parishioners signing a statement declaring "our support and affection for Cardinal Keith O'Brien".

O’Brien, the former Archbishop of St Andrews and Edinburgh, was forced by Pope Quitter, er, Benny to retire after admitting "inappropriate behavior" with four priests and a seminarian. He released this statement:

"I'm just trying to do my best to live a good Christian life myself now. Many people have been helping me to go back on the right path and that's what I have to do. But I haven't always managed to live that in my own life. … If Christianity is about anything at all, it's about forgiveness.”

It’s ironic, though, that the Church, rather than forgive him, wants to send him away and then act as though he never existed. But then, that’s the Catholic Church; hiding away it’s secrets rather than deal with them.

They wouldn’t need to exile anyone, ever again.

my head is spinning!

"no, we LIKE living in the 12th century!" - the catholic church

might damage the Church? Isn't it already damaged enough? One of these days it is gonna crumple hard! Im sure there are a ton more funny bussiness' going on behind closed doors. And I'm not talking pickle eating contest here. But close to it.

And yet another reason why Catholicism is going the way of the dodo and the Whig party.

And I agree with R.J. All I have to do is cruise by a local church when services are going on and see that there aren't a lot of cars in the lot.

But I feel the need to correct one little thing in your post. They need to get their heads out of their 13th century ass.

And this tragic-comedy of a Cardinal is STILL hoping for some degree of exoneration in blaming not himself but homosexuality itself as being an 'evil force' for his display of 'weakness'. Well those blinkered and gullible Church dignitaries may fall for it, saying "Poor soul. At least he's been trying to overcome the temptations!" Others will NOT!