You know, I was more than pleasantly surprised, after Jason Collins came out this week—the first still-playing professional athlete to do so—that people were so supportive and accepting and welcoming and congratulatory. Sure, the wingnuts didn’t disappoint—and by that I mean the ilk like Bryan Fischer and Pat Robertson—but most people were just wonderful about the whole thing.

As they should be … but I digress.

Even former Green Bay Packers safety Leroy Butler was happy for Jason Collins, and in fact, Tweeted his response: “Congrats to Jason Collins.”

Those four little words sure did start a fire. See, Butler was supposed to give a speech at a Wisconsin church this week, but his Tweet caused the church to cancel his speech unless he begged God for forgiveness. The church decided that those four words show that Leroy Butler lacks the morals to speak to its congregation.

Butler verified, via Twitter of course, that he was informed he’s no longer welcome at the church because he dared to congratulate Collins. He has, thus far, declined to identify the denomination or location of the church, but did say:

“This is what bothers me the most. They said, ‘If you ask for forgiveness and remove the tweet and you say something to the effect that you don’t congratulate [Collins] then we’ll let you do the engagement and get the speaker’s fee,’ and I said I’m not doing that. Every gay and lesbian person will say ‘You know, Leroy doesn’t speak up for the weak or the silenced. He doesn’t stand for anything as a man and he did it for money.’ Why would you ask me to reduce my integrity like that?”

Butler told the pastor that he believes the church was trying to intimidate him:

“‘This is a form of bullying, what you’re doing. ‘You’re trying to get me to do something I don’t want to do.’ He disagreed, and I said, ‘We agree to disagree’ and he said, ‘No, I’m right and you’re wrong.’”

Of course, once the shiz hit the fan—and by that, I mean, the story going viral—the church did try to apologize to Butler to apologize. He said he accepted their apology, but he would not speak at the church.

I say, Take to Twitter and congratulate Leroy Butler for being a true Christian, and not a Bigot in Christian clothing. You can Tweet your support for him at: @leap36, so named because he wore #36 and invented the Lambeau Leap.

Go on now, say thanks. 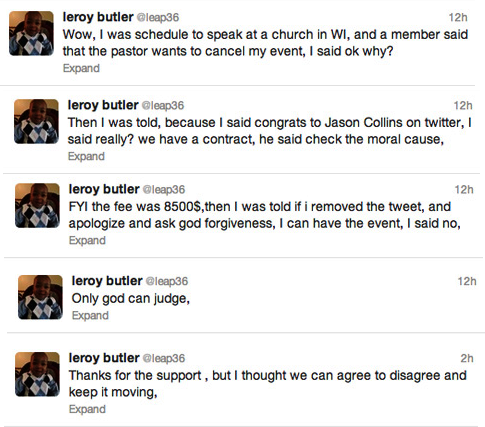 Leroy Butler is a hero and a good egg.

Someone needs to slap that asshole pastor silly.

I always liked Leroy Butler when he was a player. Too bad I didn't know this side of him when he still was.

The only thing this pastor proved is that (most) Christians preach hate in their pulpits.