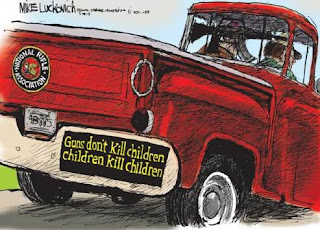 I know we have other things on our minds lately; killer tornadoes, Benghazi, the AP, the IRS, cancer. Still, I’m surprised that the Gun Discussion is apparently over, especially when this happens, again.

Jarvan Jackson, an 11-year-old Florida boy, died last week has died after being shot by a four-year-old relative on Mother's Day.

A four-year-old with a gun.

According to neighbors there were six children and at least one adult in the apartment at the time of the shooting. Jarvan’s grandmother, admits that the four-year-old, and a two-year-old—let those numbers sink in for a minute—were playing with the gun, and when Jarvan tried to take it away from them—because, um, yeah, where were the adults?—the gun went off, shooting him in the neck and killing him.

Lake City Police have ruled the shooting an accident and are investigating how the four-year-old got access to gun, but this is nothing new for the Sunshine State:


Let’s talk: if police say the shooting was an accident, then please to explain how the children got a gun? That could not have been an accident. And explain how no one, not even the parents, or guardians, or the lone adult in the house with six kids, is not being questioned about why and how there is a gun just lying about for a four-year-old and two-year-old to play with.

But, it’s doubtful we’ll get those answers, especially from what is now being called the “Gunshine" State, where, recently, the state legislature passed just one of 12 gun control bills that were filed this year. The one that passed? It restricts the sale of firearms to buyers who have voluntarily committed themselves for mental illness treatment.

Unfortunately we've had a number of these shootings in WA state too.

MY number one fear of having a gun in the house is that a child would get hold of it and think it was a toy. I just cannot imagine the lifelong pain of an accidental death of a child because of a carelessly macho attitude of some who feel they have to have a gun in the house.
Retired in Delaware

We have a gun in our house (sadly as far as I am concerned). By law it has to be kept in a gun cabinet, accessible ONLY by the gun owner and holder of a gun licence.
My husband was inspected by the police before the licence was issued and is checked every few years to ensure that he is still a suitable person to hold the licence.
Although we are far from perfect the United Kingdom has not fallen into chaos because we have strict gun control (contrary to what the NRA preaches); quite the opposite. We have very few deaths from gunshot wounds.
We lose a lot fewer policemen too.

The more I see stuff like this the more I want to see us ban handguns. Just ban them, disarm the cops, arm the detectives and SWAT of course. And only allow citizens a shotgun if they want.