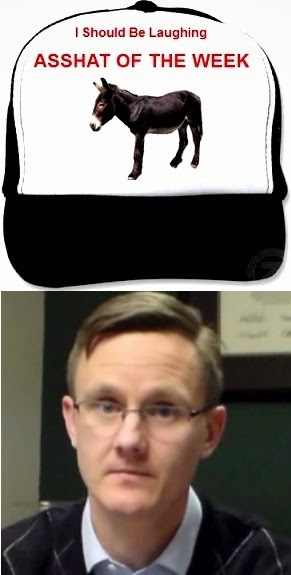 Up in West Virginia, the debate over abortion rages on, and brings all the wingnuts out in force.

The House of Delegates is discussing a new law that would outlaw all abortions in the state after 20 weeks gestation because, as anti-abortion activists — and these lawmakers — allege, at 20 weeks a fetus can feel pain and is therefore too viable to abort.

Okay, but that’s not where the crazy, er, asshatted, comes into play. That would be when Delegate Brian Kurcaba, a Republican, of course, said, in the course of the discussion:

"For somebody to take advantage of somebody else in such a horrible and terrifying and brutal way is absolutely disgusting, but what is beautiful is the child that could come as a production of this."

Now, I can agree that children are beautiful — except when they’re crying or spitting up and fussing or, well, okay, children are children — but to say that a woman, who was raped, should be pleased that she’ll have a beautiful child as a result of the experience is the ultimate indignity.

A child who results from a man forcibly having sex with a woman against her will is a “beautiful” thing according to Kurcaba. He thinks a woman, in the midst of being violated, should console herself with the thought that, if she's lucky, everything will be beautiful if she ends up pregnant after the rape.

Kurcaba fits right into the GOP Anti-Women Bandwagon, taking a seat alongside former Missouri Congressman Todd Akin, who said pregnancy can’t result from rape because “if it’s legitimate rape, the female body has ways to try to shut the whole thing down.” He’s nestled in next to Indiana Senate candidate Richard Mourdock, who said that while sexual assaults are unfortunate, the resulting pregnancy is a “gift from God,” and he’s probably sharing a soda with Libertarian Ron Paul, who implied that women routinely fabricate rape stories in order to get abortions.

Brian Kurcaba, in fine company, as our ISBL Asshat of the Week.


Kurcaba has since issued a statement apologizing to "anyone who took my comments about the sanctity of human life to mean anything other than that all children are precious regardless of circumstances."

So, basically, he’s saying he meant what he said but he ‘s sorry if you don’t like it.

I'd always feel tempted to say to those who are demanding that the birth goes ahead no matter what the circumstances of its conception, "Well okay - YOU take care of it then - and while you're doing that you can compensate me for the physical agonies I endure through going ahead with delivery". That ought to shut them up - but it won't.

the GOP only likes children in the womb; after that, the kid's on its own. asshats!

It just isn't that simple. There are as many reasons for abortions as there are women. Some do lie, some do treat it cavalierly. But why do we demand perfection of anyone? We have this medical procedure. Some people want to take advantage of it. Others don't. There are those of us who counseled women on options who were on the adoption waiting list. People will adopt. There is a long waiting list. But it is not any woman's duty to do one thing or another. Each woman is different. Each situation is unique. Let women be imperfect like everyone else. It is what it is. We can't have a perfect world.

Biki Honko said...
This comment has been removed by the author.
9:16 PM

I don't object to Brian Kurcaba (did he make that name up?) believing in the sanctity of life, so why does he object to me believing that every woman should have the right to choose to have her baby or not? Make EVERY child a wanted child!