Another One: Kenneth Weishuhn 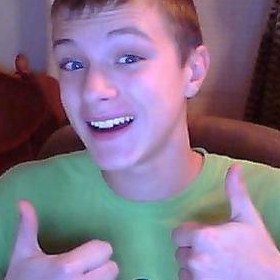 Kenneth Weishuhn lived in Iowa. That Iowa. Marriage equality Iowa. And Kenneth Weishuhn was a young gay man, a freshman at South O'Brien High School in Paullina, Iowa.
Like a lot of young kids, just figuring out their place in the world, and how they might live in it, outwardly Kenneth seemed happy and fun and friendly. Inside, was a different story.

"He says, 'Mom, you don't know how it feels to be hated."--Jeannie Chambers, Kenneth's mother.

And that was something even Kenneth didn't know, until he decided to come out of the closet.

"People that were originally his friends, they kind of turned on him."--Kayla Weishuhn, Kenneth's sister.

The teasing started almost the minute the news got out that Kenneth Weishuhn had said he was gay. Kayla, a sophomore, says it was the boys in her class who first started bullying her brother over his sexuality.
But then they took their hate online, to Facebook, creating a hate group against gays and adding Kenneth's friends as members. Then came death threats from his fellow South O'Brien students on Kenneth's phone.

"When I'd question him about the phone calls, like he just blew it off, so I just thought everything was ok."--Jeannie Chambers.

Kenneth  Weishuhn took his own life last weekend. The bullying has stopped.
According to Chambers, those South O'Brien boys who made the death threats were given a warning, but she was never contacted by the school.  She hasn't decided if she wants to press charges against the students who drove her son to his death.

"I really don't want to ruin somebody else's life, or take someone else's son or daughter from them.  But, I don't know what it's going to take to get it to stop."--Jeannie Chambers.

"To make someone feel so horrible about themselves, so miserable.  To make them hate themselves the way my brother must have."--Kayla  Weishuhn.

I seriously hope that when Jeannie Chambers has processed her grief, and comes to terms with what was done to her son, that she does press charges against the bullies. A push in the hallway is horrible. Being called faggot in class is worse. Having a Facebook page dedicated to hate, and finding your name on it is unthinkable.
But calling someone and threatening to kill them?
That requires punishment.

I couldn't agree with you more. It seems clear to me that, this time, there is more than enough physical evidence to prosecute the bullies involved.

Looking to me like there should be a class dedicated to civil behavior taught by the biggest, most intimidating male to lay down the law for some of these kids.

Want to know how to stop people like these kids from being such little pricks? The next time a kid is bullied to the point where he runs out of options and takes his own life, the kids responsible for the bullying should be made to do the death notification. I've been there when parents are told their 17 year old has died, it is horrific and it would teach a very valuable lesson to otherwise ignorant kids.

I am at a loss. But I think its hard to judge the mother for her inaction. Hindsight is 20/20, and arm chair quarterbacking is this county's biggest sport. How many of us have, at one time or another failed to follow through on something effecting our loved ones because we heard what they said instead of listening to ourselves for what we were afraid to voice?

The anger that fills me when I read these stories makes me want to punch people. Of course violence is not the answer. Education is, but that is not easy. We've taught our children that anything that is different from the norm (what ever that may be) must be destroyed. So we've learned that words are sometimes more damaging than bullets, knives and fits. And because words are hard thing to convict on, it's become the easiest weapon all people use to hurt those who are not considered "normal."

I was bullied at home by relatives who considered their actions as somehow saving me. My brother bullied me, because he saw my uncle doing it, who learned it from his father, my grandfather.

For the bullies, and the ones that learned their actions from their parents, they take the idea from the animal world, that only the strong survive; the weak pass away.

But as a species that puts us on top of the food chain, this ideal makes no sense. How is destroying a fellow human being through verbal abuse logical? How can we, as the smartest, most technological advanced species on the planet justify this holocaust?

Yes, I survived my bullying at home and school (my older sister helped there). My grandfather is dead, I've not spoken to my uncle in 20 years, and my brother -though he'll never really say the words- seems to regret his actions.

While I never think I considered suicide then, I do these days (for various other reasons).

I want these kids to know that there are people who will help them through these dark times. But I also know, when I a teen, struggling with so much shit, it's hard to comprehend the notion that there can be a Robin Hood.

We all need to be the Robin Hood's for all these teens.

Press charges against them. Prosecute them and their parents, most likely the source of their bigotry and stupidity. Force them to live in the hell of their own making where every day for the rest of their lives they have to consider the consequences of their actions.

Six years ago, I co-founded a support group for LGBT teens in my county when my son came out to me as a freshman in high school. My son aged out of the group long ago, but we keep it going for all the kids who need it. We've heard the stories of bullying not only by fellow students, but by parents, neighbors, religious leaders, etc. Bullying will not stop until there is an overt, continually reiterated message in every school, in every classroom, schoolbus and locker room, that it is not to be tolerated at any level. The kids who perpetrated this crime need to be punished, yes, but to stop it from happening again, ALL the adults in a school who are responsible for caring for the kids who are there need training on recognizing bullying, and how to implement immediate, consistent and clear intervention. Even janitors and lunchroom people should have this training and know how to at least recognize bullying and call for help. I believe that even people who are not in support of LGBT people do not want to see such a thing as teen suicide because of bullying. Parents must work on their local school boards to get this in place.

Rest in peace you precious Angel <3
May justice find those responsible.

sad story, the world will turn against
Those bullies. The are those times where u feel like taking your own life because of being bullied. It may sound silly but I think facebook shall take some actions for this matter!
His sole may RIP..