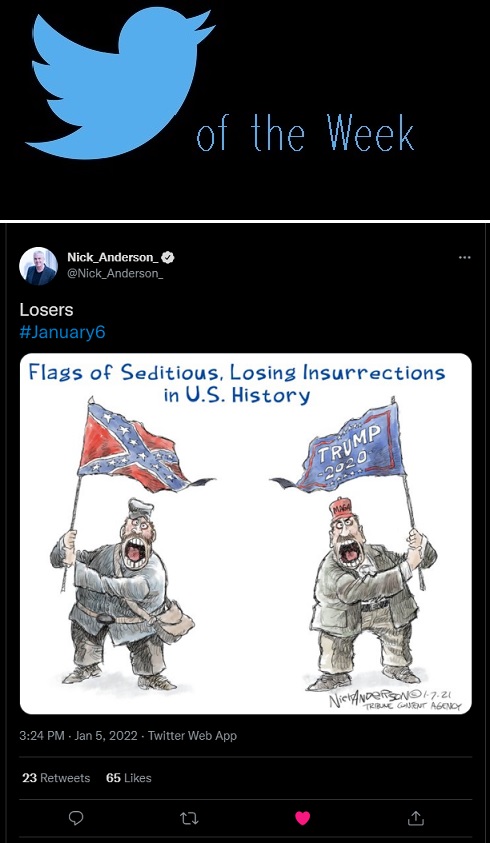 Poor Trumple Baby is having conniption fits at the cruel and untrue lies of that nasty Joe Biden.

First off, kudos to Carlos for not smothering you in your sleep, Bobulah! Sorry. Balder Half's first week of retirement. I'm bonkers already! I'll get over it and he'll survive.
That mug shot! I thought to myself "What did Cuba Gooding do now?". Maybe the drugs weren't his per se. He was delivering to the owner. That would've been fascinating to watch. Amazon take note!
Martin Ivanov. I have joined the hitting bandwagon. Hit that? In a heartbeat! All of my principles out the window!

Carlos is so much more patient than San Geraldo, who would simply say “Stop it and let me tell you my dream!!!” Lady Whoga?

Martin Ivanov? Nope. He just doesn’t do it for me.

A little Andy Cohen goes a long way, in my book.

All the more reason animals are not meant to be caged. They have their natural instincts....yet they are the ones shot and killed. Another reason I can't stand humans.

Carlos is learning from a expert!!!! Look out toots.

And any polictians not showing up is a disgrace. I wish Biden had the power to just remove them asshole.

Martin? I'd rub his shoulders and send him on his way.

Anderson Cooper has terrible taste in men. Well, honestly, I think he's just terrible, period. A bit of a priss, a bit of a two-faced azz. And Cohen? Well, my opinion of him is even lower... so. I will spare you the four letter words.

Kelly Ernby... well, that is sort of what I had in mind. I still would like to see someone with a higher profile in the party meet a similar end... like... Moscow Mitch?

Drinking and driving is NEVER funny... but I laughed anyway.

Poor tiger. Humans are terrible. Zoos are even more so.

Florence is cute. If I was that officer I would have done a much more thorough search.

Nice of the orange ogre to keep his pie hole shut... for a change. I think that's the nicest thing I have ever said about him.

Hope Tux is doing well. My Tuxedo is sick. Not sure what is up. Sits on the bed all day and is mopey.

Oh, how you tease. Poor Carlos. Good thing he has you in his life.

Thanks for the feed. Kizzes.

Carlos one-upped you yet again, LOL. He definitely needs to start that Carlosservations page. Pulled over for a traffic stop and they found cocaine and methamphetamine wrapped around his penis??? Sounds like sex assault to be searching his private parts.

If I had a nickel for every time I a stranger tried to wrap drugs around my penis, then I would still not have a nickel. I didn't know those additional details about the tiger. They should have shot the man. Happy New Year, Bob. Hope all is well with you and Carlos. Take care.

Mr. Bulgaria is sure something else!!

@Helen
Especially with what Joe said about him today!!

@Deedles
Luckily Carlos really loves me, or else ... look out!
Cuba Gooding!! Oh my. Now that’s all I can see.
I will put Martin on the bandwagon and send him your way!

@Mitchell
Carlos has the patience of a saint, and I am so lucky!
There’s something about Martin, I can’t quite put my finger on it, though I’d like to try.
Maybe feed a fossil fuel CEO to a tiger??

@Debra
Yes he did, and he is still floating on air!

@Maddie
I am 100% wth you. The wrong animal was murdered,
Carlos is learning, and it’s about damn time!
Hopefully We The People can remove them, when we what?
CAST A GODDAMNED VOTE!

@TDM
Thing 45 mugshot, yes!
xoxo
@upton
Sadly, that Tweet seems spot on with the way the GOP acted today!
I might rub Martin a little lower …
I like Anderson, but Andy is a drunken loud STD.
I loathe being mean, but if the GOP doesn’t wanna vax then they can just die.
Luckily, I don’t drink and drive, but I do margarita and walk.
The police shot the wrong animal.
That drug mule is kinda hot. I might have wrapped a little something something around his private parts ….
I think he might be realizing that when he speaks he outs his foot in his mouth.
Our Tuxedo is good; he was feisty ad biting me all morning. Hope your Tuxedo is okay, and nothing serious.
If I didn’t tease Carlos I don’t know what I’d do!!
xoxo

@Boots
When Carlos gets funny, he slays me!
And, yeah, I wonder how it went from broken taillight to gun under the seat to drop your pants.

@Mr.Shife
Yeah, I keep thinking how someone wrapped my dick in drugs and I was kinda okay with that?
The tiger was being a tiger; the man broke the law.
Happy New Year to you and all the Shife-lings!

@Michael
He is kinda dreamy, no?

Sorry, but I didn't know Lady Gaga was in an egg?

You do have a lot of dumb shits on here today, don't you? I hope the zoo charges the loser for the tiger they had to shoot for his stupidity.

And, did you really have to ask about Martin?

They should have left the tiger along to finish his volunteer lunch. Fire whoever fired. I gave up on and the Andy and Anderson fiasco, Andy was DRUNK, and going off on rants, you could see Anderson trying to calm him down. I changed over to some other tired old queen (Ryan) it was less cringe worthy. I miss Johnny Carson and Guy Lambardo

Patrick Florence for the win!

A traffic stop ended up with them viewing his drug wrapped Penis? Please explain how THAT happened, I've never had to get my Lady Bits inspected by the Pooolice during a traffic stop! No wonder he has such an impish smirk, me thinks there was MUCH more to that Story. Poor Tiger, they should have shot the Asshole who invaded the Tiger's space and tormented it, who the Hell even tries to 'pet' a Tiger, he was trying to harass that poor Animal and it got even and did what Tigers do... the Tiger did nothing to deserve a Death Sentence. A little bit of Andy Cohen goes a long way, yes, Anderson is prissy, but I still like the little Priss and I love how caught up he is on being a new Daddy. But, why do I think perhaps Andy Cohen's kid might end up in Therapy and writing some Daddy Dearest Memoirs? I hope not, but the Man seems bitter and mean.