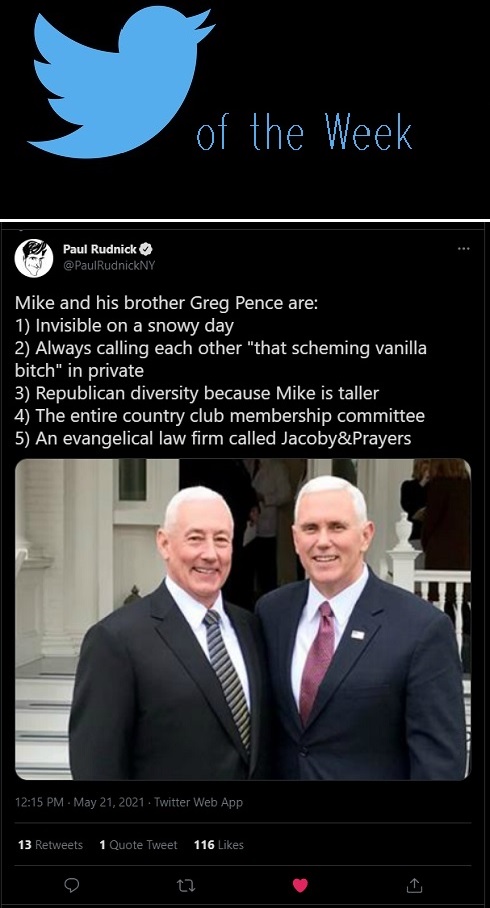 Oh dear. I'm turning into Carlos!
Love the hot model whose name I forgot that fast! I can fit that little bootay into the palm of one hand. Wish I had the chance to prove it.
That tweet is everything.

Hahaha. Carlos IS me, Bob. That's all I have to say.
And the Repugs and their bible/gun/flag is just pandering. And their idiot constituents eat it up. Dumb and dumber.
I loathe Nimrata and her hypocritical ass. Fuck her.
Bill *barfs* Cosby.
And that tweet is fantastic. I despise The Devil's Butler with the power of a thousand suns. He makes mayonnaise exciting.

Sometimes you just have to solve a problem, or invent one just to have something to do. For instance a few weeks ago I spent an inordinate amount of time researching and sketching the ideal layers of a lasagna. I get Carlos.

Don't try driving with a bible in one hand, a gun in the other and a g]flag flapping in your face - it could be fatal.

Carlos' solution to that vacuum problem is probably exactly what I would do. I think your husband is adorable!

Ah, Jhonattan... Do you think he'd share his hose?

And keep those times with Carlos in good humor. I miss all the dumb things William would do. Now I would do anything to have his annoying mindless habits back.

@Deedles
Carlos IS amazing,
And that little butt is a handful!

@Todd
I can still hear her in my head as I post certain things!
Take care.

@Six
Carlos is rather ingenious, though not always successful, and the effort is a joy to behold.
Nikki can take her hypocrisy, shove it all the way up her ass, and them for good measure, fuck all the way off.
Xoxo

@TDM
I’m trying to channel her these days.

@Brewella
He does get his mind working to solve a problem. That’s one of the things I love about him.

@Helen
Thou shalt not kill, but thou shalt love guns.
:::barf:::

@Treaders
He is totally adorable.

@Steve
Those Pence boys are so white they’re almost transparent.

@Mitchell
The way his brain works is a wonder to watch.
If you ask nicely, I’m sure Jhonattan would hose you down.

@Agnes Goldberg-DeWoofs
Paul Rudnick is hilarious on Twitter.
Thanks for the advice. I adore Carlos for his never-say-die optimism, and his ability to try ANYTHING!!!
Lastly
I’ve always meant to say this, but I love your name …Agnes is my favorite grandmother’s name, and Goldberg is one of the cats’ last name. Makes me smile when I see you comment!

Lt. Governor Janice McGeachin. That cunt!!!! I'd like to take all three- the American flag, a Bible and a gun and shove them up her ass!!!!!!! Bitch.

"The same people who took hydroxychloroquine, or worse, drank bleach, are the same folks who won’t get vaccinated because they think it’s harmful. And their the same stupid dumb asses paying $35 for a vaccination counterfeit card when they could get the vaccine for free. Think much????????????????????????

Nikki Haley would look better in a wood box. I'm tired of these cunts.

The Pence Brothers... looks like a horror film that hasn't been made yet.

Jhonattan (name?) is very handsome and certainly spicy enough, but too young for me.

We had better damn well NOT move on from Jan. 6th. People died. Property was damaged. Trust is gone. Destroy the repuglican party.

Haley really troll the VP? Haley is the new Sarah Palin. F her. She's yet to complete an assignment. She is weak soup.

That photo makes her look like such a tool. How stupid are people? What year is it? What state? Oh... well, all they have are potatoes, so what do you expect? Spud heads.

Huh. Quite frankly, I think the Queen can do better.

@Maddie
I love that about him; no quitter, that one!
Yes, I’m sure her ass is big enough for all three.
The ignorance on the right is stunning.
Nikki Haley doesn’t seem to realize she’s a hypocritical lying bitch.

@upton
The Pence Boys in Children of the Boring
I like the young ones every so often.
All those Benghazi hearings that amounted to nothing and they want to move on? FUCK DA GOP!!!
Haley doesn’t have an opinion until someone gives it to her, and then she changes it when a new one comes along.
Yes on Cosby.
That Lt. Governor really thinks she’s cute, but the message she sends? Not so much.
If Betty Windsor hooks up with Gates, maybe he can let her in an Prince Andy’s dealings with Epstein??
Carlos is the most adorable thing ever!
Xoxo

Nice tribute to Anne Marie! I can see her saying that. Love the piece on the Pence brothers.

@Michael
I can hear her saying that all the time!!

The only thing McGeachin is missing is the Holy Hand Grenade, hold a second while I pull the pin.

The GOP have lost so much credibility with everyone but their base... but do they really care?

I saw that thing about Nikki dumb ass.

@Dave
She, and the rest of the bible-thumping, gun-toting, flag-waving loons should have the grenades shoved up their asses. I'm channeling Anne Marie here.

The tools are in a closet outside my bedroom door, I shudder when I hear that door slide open, what is he going to FIX this time.

@Travel
It can be scary, right?