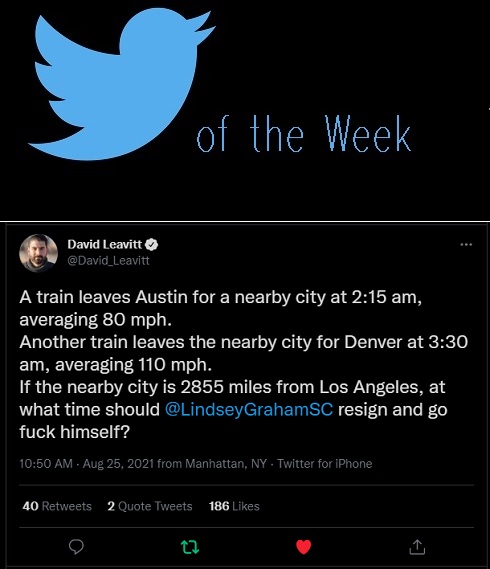 Oh, I can empathize with Carlos here! Balder Half is always telling me "How can you remember something from when you were two, but can't remember five minutes ago?"
Ah Tuxedo, not all people have the common sense God gave a cat. Let them eat paste!
Loved the tweet. I loathe math, but it was used very creatively here.

My Dad was the archetypal absent minded professor who had been known to wander down into central Oxford in the middle of the night to complain about the music from a college ball keeping him awake. My Dad's outfit on such a trip? Pyjamas, dressing gown and slippers, but of course he'd be wearing his glasses.

South Carolina? What else do you expect? I am amazed at how convinced people can become of something that makes no sense. Just imagine how 'brave' she felt? How she was shaking? It boggles the mind that someone would get up and say something so stupid. This is what is wrong with America's education system. People like this continue to breed.

Spencer Elden bites the hand the feeds him. I wonder if the band will sue him for copyright appropriation and demand he remove that stupid tattoo - which an attorney will point out signifies that at one point he definitely thought the whole thing was cool. What a dick. His two seconds of fame?

Good for you, Bob. Ms. Sugarbaker would be proud. See or hear ignorance? Call 'em out!

The FDA - shaking my head on this. Didn't you previously have a story about a politician who is promoting this cure all because he owns stock in the company? He should be arrested... and thrown out of office.

Mike Richards got what he deserved. Why does he get to pick the next host?

Thank you, Tux. Fox and the Repulsivecans are trying their damnedest to make something of this... tone deaf, per usual. F 'em.

Memory is a strange thing. My mind works like Carlos'. I can't find anything I set down, especially when in a rush... but I can tell you all sorts of chart listings for various songs. Sigh.

Ok, so Shomari? Holy cow. Is that man beautiful. I need him to help me choose a bathing suit. STAT.
And Carlos is basically me. I think we literally cannot retain anything we don't consider important. Literally.
Oh, Erik Prince. Betsy DeVoid's brother. There's not a scheme to make money they don't like.
And did Matty consult with Nestor before marrying his beard? Also, she can still be compelled to spill what she knew before he married her to silence her?
And I love how you let Mr. Gay Friendly (c) HAVE IT. You go, Ms. Sugarbaker!

@Deedles
Tuxedo lives for common sense.
To be fair, Carlos cannot remember anything from when he was two, or 22, 32, 42, 52 ... so I was stunned he recalled the movie so completely.
The math makes sense here.

@Helen
I now have a vivid picture of your Dad wandering about and I love it.

@upton
I do love a good David Leavitt Tweet!
I always love a person who says they have proof and then produce none.
Spencer is either looking for fame or a few more coins, but his promotion of himself as the cover shot of that album will likely derail his suit.
I do like a Sugarbaker Moment, and this tool deserved it.
Ron DeSantis took millions in campaign donations from a amn who owns stock in Regeneron that Ron then espoused as the cure for COVID.
Sadly, Mike Richards is the executive producer of Jeopardy which may explain why he wasn’t more fully vetted, and explains why he gets to choose the new host.
Tuxedo spells it out and takes no prisoners.
Carlos is not usually so adept at remembering the plot of a film so this one took me by surprise!

@TDM
Yes, they deserve it.

@Six
Shomari Shomari … if I looked like him I’d be in my under 24/7.
The one thing that makes me laugh about Mr. Forgetful is when he asks me where his phone is and I remind him that I don’t use his phone so it’s clearly where he was last holding it.
I just love “I’m gay friendly” but I don’t wanna know about gay people.

Oh my goddess! I was about to comment on how I want Shomari to show-me-more. That is one hot man. But then I hit that tweet and I forgot about Shomari. OK, that’s a huge frickin lie, but still that tweet is the best. You ARE Julia Sugarbaker!

@Mitchell
I didn't buy it for a second that you forgot Shomari for a Tweet! Luckily, you copped to it because I was about to go all Sugarbaker on your ass!

What tweet? Oh, yeah, that really good one about Miss Lindsey. Anyway, back to Shomari. He DOES take one’s breath away.

This week's segment made me a bit more sick then normal. Your Carlos sounds like my William did with subtitled movies. He'd watch, but could never read fast enough.

And that Erik Prince, what a noble idea. But when will the well to do, do anything for the good, or give charity when they don't get anything out of it? All the millionaires and Hollywood we have in this country, and hardly anyone to my knowledge has volunteered this service. NOW...where is Musk, Benos, and Branson???? And others?

What a greedy country this is.

One thing good about all of those people taking the horse paste, when they finally recover from Covid none of them will have worms.

I can figure out why Spence didn't just start a Go Fund Me?

Eric the Greedy needs to change his name... now!

@Agnes
Well, these rich warmongering scum will act noble and talk about getting people out of Afghanistan but will need the $6500 up front.

@Dave
They'll have worms eating them from the inside out six feet under.

I have to chime in...I could see you channelling Julia Sugar Baker-accent, gestures, and firey gusto...

Carlos is a peach. That is why we love him so. I talked to an old friend the other day and I was mentioning her superpower. She can remember a conversation word for word. Me, for the most part, will remember what I talked about but not the detail. And I manage people for a living. That is why I take notes after the conversation.

Don't get me started on Afghanistan. I have had to curtail my intake of the news. The way they tell it Uncle Joe has only evacuated a couple thousand. Kris Jansing-MSNBC- has been hopped up on caffeine the last few days. I had to turn her off. It was just one hit after another. Has the airlift been perfect? No! Now with the recent bombings, the war hawks and contractors are beating the drum. Uncle Joe is just pressing ahead. Good for him!

I love what you said to your coworker! Awesome!!

Tales of Carlos are my favorite. ❤ The Red Violin was a great film so he obviously has good taste!

As for Spencer, he's been milking that photo for all it's worth since he was a teenager. Now he's obviously looking for one last big payout. Talk about shameless!

@Victor
I do so love a good public rant, and for me to do so without curse words was an added bonus.
Carlos is a peach and now I know that when I need a verbatim recap of The Red Violin I can go to him.
Afghanistan is the fault of every elected official going back to W; you cannot lay all the blame on the current president.

@Jennifer
I just don't like "I'm okay with gay people because I have gay friends." It reeks of "I'm not racist I have black friends."
I loved that movie, and though I didn't see it with Carlos because we hadn't yet met, I was shocked that he remembered it so vividly.
Spencer just needs to be noticed.